The Mountain, The Lake, The Town - In Our Dreams 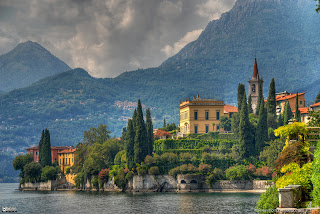 The last time I spoke of Varenna, the little hamlet on Lake Como, way back in November, we had crashed in the minimalist interiors inserted into the massive stone walls of an ancient monastery after a nine hour flight and two hour train ride. Like so many small hotels in Europe, the Emero Gaudio proves that quality modern design and ancient forms  can not only coexist, but, can actually create unique spaces that render the sum of the parts much greater than the whole. Of course it doesn't hurt that the original structure was built into the side of a very steep mountain overlooking one of Italy's most beautiful bodies of water. 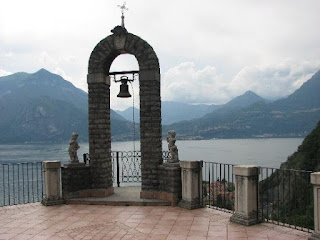 And that beautiful body of water came in very handy our first morning in the Italy of our dreams. We awoke refreshed with all traces of jet lag banished from mind, body and spirit. It was the lake that provided the breathtaking backdrop for our first breakfast on the grand terrace of our little boutique in Varenna. I say little, because The Emero Gaudio only has twenty five rooms. By American standards, that is positively itsy bisty! I must admit, after staying in the smallest of hotels in Europe, I have become spoiled. The intimacy of a small boutique makes one feel like one is part of the landscape, not just a detached observer along with the throngs clamoring to hopefully get a decent room, located somewhere with a decent view without breaking the bank. You actually get to know the staff, the environment and a real sense of the place on a very personal level. That just does not happen at a thousand room resort. "Vagabonding small" allows you to "Live like a local", as Rick Steves points out in his many books, even though you really are just  passing through.

Funiculars are Simply The Coolest Vertical Transportation Ever Invented 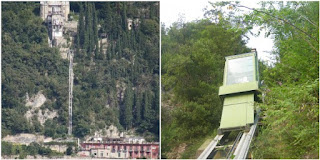 One of the most rewarding aspects of traveling  on the unbeaten path is the little things that make travel adventurous and unique. Even though I knew what a funicular was from my days in architecture school, I had no idea that they actually existed in our modern over-teched twenty first century. Well, they do exist at Emero Gaudio and they add to the simple romance of this tiny little hotel overlooking this quintessential Italian village. For the uninitiated, a funicular is basically an inclined elevator or tram that is pulled up and down a mountain on tracks with steel cables.  As I stated in the last Lake Como post, the hotel actually has two, requiring you to take one half way up the mountain and then go the rest of the way on another. Completely enclosed with glass, you can enjoy an ever expanding panoramic view of the town and Lake Como as you slowly climb to the hotel approximately 1,200 feet above the lake.

After finishing our well prepared breakfast on the hotel terrace, we headed down the mountain in the Jules Verne-esque inclined rail car not knowing quite where we would go or what we would do. Since both of us abhor any kind of fixed itinerary when we travel, we were ready to soak in all that is Italian in this little slice of heaven on the lake.

What Do A Couple of Wide Eyed Vagabonds Do In A Town of 800?

After getting off the funicular, we walked the short distance into this small hamlet nestled  on the eastern shore of Lake Como. According to Wikipedia, Lake Como is a lake of glacial  origin. It has an area of 56.4 square miles, making it the third largest lake in Italy. At over 1320 feet deep, it is one of the deepest lakes in Europe. The bottom of the lake is more than 656 feet below sea-level. And of course, American movie start George Clooney has a little villa right on the lake south of Varenna. Even though Lake Como is a favorite haunt of the famous and infamous, according to various reports, a star of his magnitude has not exactly been embraced by the locals. Paparazzi and all that. 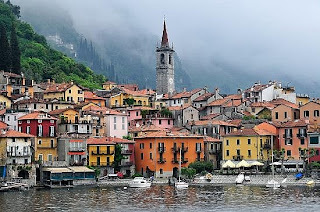 Since we didn't have a personal invite to George's place, we decided to just relax and enjoy the day. In early May the weather is perfect for simply sauntering and taking in  the sites and sounds of a place that is completely at ease with itself, both as an ancient city and a modern destination for people who, like the two of us, loathe malls, airplanes and big hotels. The first thing that struck me was the tendency in this great country to embrace the small things that make life better. When you combine the Italian sense of design with an unwavering embrace of tradition, what results is a truly eclectic, intimate sense of place..  Even though you are a temporary visitor, a nomad no less, the idea that you are just another tourist never crosses your mind. After years of travel, I am more convinced than ever, that the feeling of belonging in a foreign land can only come from a natural comfort with a place's culture and way of life. And the people. Don't get me wrong, I love America and its people. But, experiencing the people of Italy and their simple love of life changed my thinking about travel and other cultures in this world.

Gelato Is What Saint Peter Will Give You When You Arrive At The Pearly Gates! 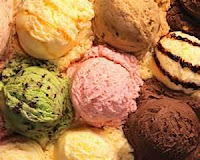 But Gelato - real Italian Gelato - is proof positive that you can experience a little bit of heaven right here on earth. Just saying the word brings a smile. Even though Gelato is the Italian word for ice cream, it is NOT ice cream. The combination of milk, cream, sugar and various fruits or flavorings, when made by hand, creates a desert that transcends our notion of ice cream. True Italian gelato is made with a much larger percentage of whole milk and churned at slower speeds, giving it a much creamier and smoother texture. Where else but Italy can you actually get cantaloupe gelato? I know it sounds weird, but trust me - you will thank me for this culinary tip. The Italians, known for their passion in just about all endeavors, apply that same obsession to the preparation of gelato. From that passionate process you get a tasty delicacy you just can't buy in a grocery store.

Gelato dates back to ancient Rome, when the Florentine architect Bernardo Buontalenti is said to have invented modern ice cream in 1565. I think you would agree that we owe s. signore Buontalenti a debt of gratitude for this cornerstone of western civilization. The passion that is engendered by this wonderful culinary confection really cannot be explained or fully understood until you actually experience it. My first taste of gelato, sitting beside the bucolic Lake Como, will forever be etched in my mind as one of those seminal moments when travel, like life, really is about simple pleasures.

Varenna Was Made For Walking 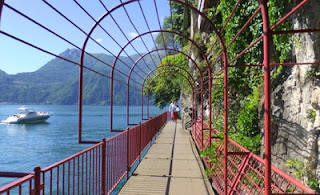 Enjoying a lakeside gelato is just one of the many things that the peaceful nomad can enjoy in the little town of Varenna. For three days we basked in the glow of the people, the food and the beauty of this slice of heaven on earth. One traveler described Varenna is utterly lacking in "tourist" shops and other faux things designed to make you think you are in a unique environment. It's all true. Because Varenna is off the beaten path, across the lake from the more  famous lakeside  tourist destination Bellagio, you get to enjoy all the delights of this great little place with none of the annoying aspects of a typical tourist destination. The website for Varenna eloquently describes this special lakeside village:
Varenna - A corner of heaven dipped in the blue...a  pearl set between lake and mountain, nursed by the breeze and kissed by the sun...a place at the limits of the time where modern services marry with its old notoriety that touch every corner of the world.
After numerous walks along the romantic, arbor covered lakeside walkway, taking lunch at one of the many lakeside cafes or enjoying a fine Italian dinner in one of the many top flight restaurants in this romantic, rustic village, we reluctantly left Varenna with memories of the real experience of traveling as a true Nomads, feeling fortunate to have dropped anchor in this little corner of God's country on the big lake.
Mangiate, bevete e siate felici in Varenna,

Travel Quote of The Week - "I could have bought a Mercedes. But a Mercedes can't make gelato, and this machine can" - Robert Davidson
Video Artist of The Week - If you like jazz, you will love these guys. From Italy - Marsico & Organ Logistics with guitarist Lorenzo Frizzera performing a composition called Lou - dedicated to the late great Lou Rawls.


New feature -For Quick Nomad Info - Click under Random Vagabond Alerts! at the top of the right margin.