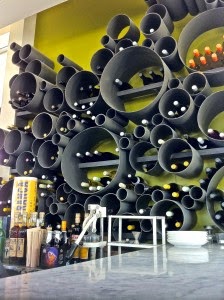 Like the line from the Mick Ralphs tune Oh Atlanta  says - Oh Atlanta I Got To Get Back To You. So we usually get to Atlanta several times a year. Fortunately, the weather was fabulous during one of our recent trips to visit our very handsome and brilliant son and his even more brilliant and adorable wife, giving us ample reason to venture outside. Atlanta always impresses when it comes to places to eat, both fine and low rent, so we decided to try some old favorites and a few new ones. The design of many of these newer places, particularly in Midtown, with an eclectic mix of avante garde, industrial chic and Jackson Pollock,  is often at the cutting edge of trendy, which makes for a great aesthetic, if only temporary, before the next wave brings about new hipness requirements. Design now becomes fashion. As an architect and interior designer I get that. However, as my old Professor Gettle used to say, trendiness begets tediousness.
Good architecture is NOT akin to a  pair of Gucci's or a $600 Michael Kors bag. However, in retail and food service, in particular, the line between the latest Armani soon to be on the half price rack suit and the industrial-rusty walled-spilled paint on the floor-retro graphics-ooh isn't this just the hippest place you have ever seen design aesthetic is very thin. Don't get me wrong, I am a lover of all things new in design. I just don't see Frank Gehry's creations being included in the pantheon of great western architecture like, say, a Richard Neutra house or the Chrysler Building. But, in Atlanta, at least they are trying.
Design and aesthetics aside, one thing must be said about Atlanta. If you've a mind to, you can enjoy some very cool culinary delights in all manner of places, from the simple joint in a repurposed urban hay barn where they claim they grow everything on their menu in their very own backyard  to the more highbrow penthouse revolving eatery where they claim that  the beef in their restaurant comes from the offspring of a single bull named Bastion who feeds only on special organic free range grass in a small village in the Andes and they fly  it in fresh every day on their own refrigerated high speed modified F-15. Only beautiful people, or at least more attractive people with money,  eat in this beautiful enclave high above the city where Bastion's little ones are served only on sustainable extra virgin bamboo dinnerware. Now these places may or may not exist, but, any town that has a restaurant where patrons literally eat in the dark - Dining In The Dark - will surely have unique choices such as these I have imagined for Nomads traveling to The Big Peach.
No Nothing For You! 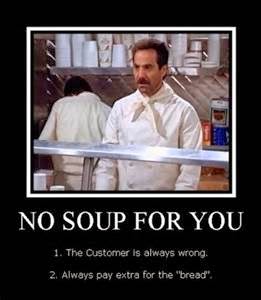 After visiting several new dining establishments in A-Town, I discovered a disturbing trend among some of Atlanta's more hip eateries.   Many of these places have developed a business model similar to the renown Soup Nazi of Seinfeld fame. The food is killer with an attitude to go with it, and I don't mean that in a good way. In their quest to become the NYC or Chicago of the south, these places are slowly taking a path which many young Millennials and Gen Y'ers have come to accept but this old Baby Boomer finds annoying and tedious.

Case No. 1 - Taqueria del Sol
This place has some of the best Mexican meets Old South cuisine served anywhere. With items like Memphis Tacos (pork & jalapeno cole slaw) or Fried Chicken Tacos (fried chicken & jalapeno mayonnaise) you can't go wrong. And with sides like spicy turnip greens or blue cheese mash potatoes, you can enjoy a well rounded meal to die for, literally. And the prices are very reasonable. However, you must follow these rules to ensure an incident free dining experience:
Bottom line - Nazis or not - the food's worth the wait and the prices won't force you to dip into your Quicken Line of Credit. Just don't bring a kid or dilly dally at the counter!
Case No. 2 - Antico's Pizza  Napoletana
The sign says BENVENUTI TO WORLD CLASS PIZZA. I don't think so! You are not welcome and the pizza is, well, read on. A partial list of Nomad complaints:
Bottom Line - On the Soup Nazi Scale - these guys take it to a whole new level. Unless you like average food in a loud, not particularly friendly atmosphere, pass.
Case 3 - Gio's Chicken Almafitanoi
This little place is in the same building as Antico's. Great food, decent prices, mediocre staff. Must be something in the air. Some thoughts on Gio's:
Bottom Line - I will go back. When the food is that good and not that expensive, the annoyances can be forgiven. And the itty bitty bottle of wine didn't suck.
Case No. 4 - Café Gio
Advanced Nazi training is most evident at the gelato counter. This very small place is in the back of Gio's. Only three things need to be said:
Bottom line - If you can find a parking space, go ahead. But you could do much better at Pelatos Gelato in the Virginia Highlands. Great people and great gelato.
And Then There's Bacado's - No Nazi's, Soup or Otherwise
At least one restaurant in Midtown Atlanta is bucking the Soup Nazi trend - Bacado's. Located in Midtown, this unique eatery has everything you need for a great night out - a funky, very hip interior design, complete with an open air "porch" at the back and supremely pleasant and helpful staff. From a very diverse menu, I took my son's advice and dined on the best twelve dollar hamburger this side of anywhere. Expertly prepared with a blend of brisket, pork and angus beef and cooked to perfection on a fresh grained bun, this burger will set you free, indeed.
One word of advice on the appetizers. I ordered a "plate" of the Thomasville, Georgia Goat Cheese. The cheese was excellent, but it was the single smallest piece of cheese ever served in restaurant. We had a good laugh and, I , being a good Nomad, actually cut up the cheese into four pieces for all to enjoy along with a nice, and pricey, bottle of Pinot Noir. As we enjoyed our morsels of cheese and wine, we had a great laugh at the lilliputian size of the cheese produced just thirty miles north of my home town. And finally, an entirely new concept in today's new urban restaurant obsession with long lines that prove we are the hippest of the hip - They take reservations - How Quaint!
And Then There Was Baseball 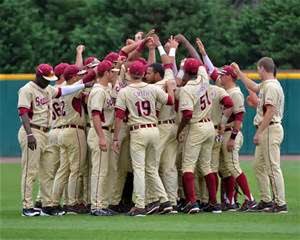 To top our weekend off in the Capital of the South, my son and I attended the Georgia Tech vs Florida State baseball game. With the great weather and a beautiful college setting on the GT campus, there is just no better way for a Nomad to appreciate the best parts of life than attending a baseball game with his son. What is it about food purchased at a baseball game? It just taste better for some reason. A burger and nachos with fake cheese - Oh Yea Baby! And, in this setting, the canned coke works. As luck would have it, we trailed until the sixth inning, when we took the lead and held on to beat the Yellow Jackets. All in all, a pretty good day. It's nice to know that you don't always have to go around the world to savor the best that life has to offer.
So next time you are in the hometown of the one and only Ted Turner, aka MOUTHOFTHESOUTH, enjoy the food and notate the attitudes for future reference.
Bon Appetit Y'all
D.L. Stafford
thenomadARCHITECT
Travel Quote of The Week - "If I ever get back to Georgia, I'm gonna nail my feet to the ground" - Lewis Grizzard - humorist, writer and raconteur.
Video Artist of The Week - Little Feat - These LA rockers combine blues, R&B, jazz and southern rock to bring a sound that makes you move. Check out an old Midnight Special performance with none other than Emmylou Harris and Bonnie Raitt singing back up on the classic tune Dixie Chicken.