The Cotswolds - I Never Knew I Could Like Quaint So Much

I am finally writing about our UK trip after returning almost two weeks ago. I tend to ponder my travels upon return and over analyze said travels to the point of obsession, instead of just enjoying the memories, the photographs and the remembrances of the laughter and the unexpected things that make traveling such an adventure. And, even though this blog is primarily about the design and sense of place that hotels do or do not have, you really can't separate those places from all of the other activities and scenes played out in a faraway and strange land.

Although the source cannot be confirmed, somebody British - Winston Churchill, George Bernard Shaw, Oscar Wilde - said "Britain and America are divided by a common language". Well, after our trip, I would add a weak dollar and an insane exchange rate to that quote. Simply said, England is the most expensive place on earth and London is the most expensive city in the universe!!! However, it is possible to enjoy this great country's history, it's people and it's culture without breaking the bank, but you have to do your homework  BEFORE you go and then be willing to follow that road less traveled.

So, here we go - The Cotswolds - Where Quaint is A Way of Life

After spending a wonderful night at The Remont and enjoying the great food Oxford had to offer, we headed out for Chipping Campden in the Cotswolds. The Cotswolds is the most English of any area of England. And Chipping Campden is the most intensely English of all places English in England. It has it all. Narrow cobbled lanes, small shops, organic and ancient plazas, flowers everywhere and a central market square make it an interesting place to stroll and enjoy the day. As we arrived at the outskirts, the beautiful day revealed a storybook like place rendered from a John Constable painting.

We spent most of the morning leisurely strolling through this enchanting little town. It seemed that every turn brought some interesting, unique element into view. After purchasing some snacks in a small grocery store for the road trip to Wales,  I noticed something. Where were all the thatched roofs? I asked a gentleman at the travel office where I could find these uniquely British architectural  creations I had come to expect after reading every travel book from Rick Steves to Karen Brown. The gentleman explained that many of the "great thatches" have disappeared, but directed us to an area in Chipping Campden where we might see some of these quintessential English architectural  gems.

After making several U-turns and side trips, we happened on some classic thatched roofed houses of extraordinary character. I was struck by the artistry and detail of this most human of architectural constructions. Borne out of a need to create a cheap roofing alternative in the countryside, thatched roofs have become a symbol of affluence in today's modern England. As you would expect, the history of Thatching is long and interesting. If you don't think it's interesting, reading about it is a great cure for insomnia. Some houses in England have base thatched roofs over five hundred years old. How's that for durability?

As we loaded up for the drive to Wales, we said goodbye to - Well, let's just say - If you don't like quaint, stay away from The Cotswolds. 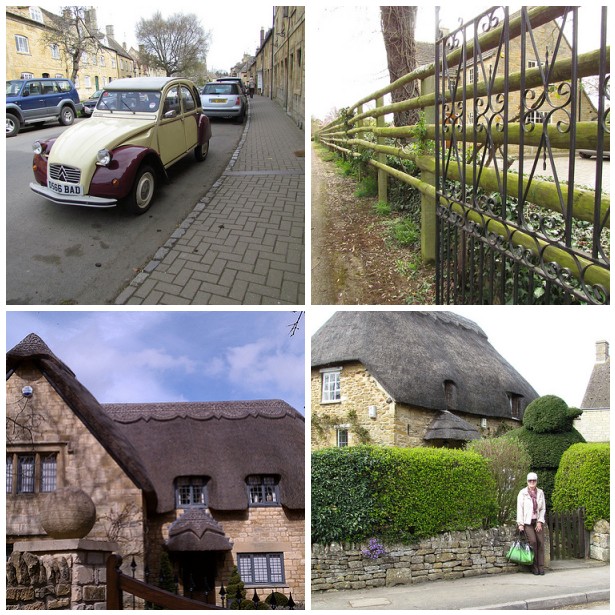 In the next post, we'll take you on the first leg through Southern England and Central Wales. Katherine Hepburn said that Wales was the most beautiful place on earth. After this trip, I can see why she came to that conclusion. So stay tuned - you don't want to miss it!

Travel Quote of The Day
"I had a prejudice against the British until I discovered that fifty percent of them were female.” – Raymond Floyd

Until Then - Steady On

This Week's Featured Video Artist is the incomparable James Taylor. In a future post, I will be discussing great Road Trip Music. His double CD - James Taylor Live - is an absolute must to have on anyone's music list for highly improved car travel.
Posted by D.L.S.architect at 3:40 PM