From LA To Paradise - Roadtripping in The Golden State Part One 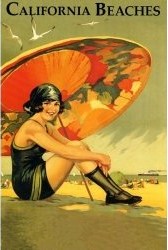 California. Pick your image. From movies, books, tabloids and every source imaginable, no place has been written about, dreamed of and experienced more by young and old, rich and poor and good and bad than the State of California. It is more diverse geographically and culturally than any state in the Union. It is the birthplace of American Cinema, Sixties Counter Culture and one of the greatest wine producing regions in the world. California has given us the Beach Boys, The Doors, Silicon Valley and Frank Gerry. Yes, California has it all - from the sublime to the utterly ridiculous. Traveling in The Golden State is, more or less, like a Hitchcock Film - You know you are going to be delighted and scared and you cannot resist it. If you don't think you can get scared in California, just get lost in South Central LA at night!

LA - City of Angels Or Insanity On Parade? 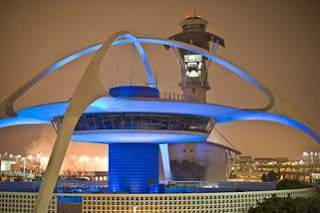 Landing at LAX, you can see The Theme Building. According to Wikipedia "It opened in 1961, and is an example of the mid-century modern influenced design school known as "Googie" or "Populuxe." The distinctive white building resembles a flying saucer that has landed on its four legs. It was designed by a team of architects and engineers headed by William Pereira and Charles Luckman, that also included Paul Williams and Welton Becket".  This iconic building gives one the sense of the futuristic promise of Los Angeles. Given the current state of affairs in California, that is a very tough sell. There is diverse and then there is just cultural rot. The only real good thing about LA is the weather. And even that can be hard to come by, given the pollution and environmental disaster that man has wrought in this city of thirty seven million. To put it another way - LA has an average of 7,000 lost souls per square mile! Even if you are not good at math - you get the picture. I am convinced the angels finally left this year when they passed a law against throwing a frisbee on the beach! To paraphrase Dennis Miller - LA is what happens when morons take over. From the twelve lane highways to the endless panorama of "ugly little boxes" in moribund subdivisions, LA, for me, only exists as a forced layover to somewhere else.

However - There Are Needles In That LA Haystack

Even though my stays in LA have been, by design, short,  I can attest that there are architectural jewels hidden away in various areas. Because The Left Coast has always embraced American design innovation, many iconic architects have worked there , including such luminaries as John Lautner, Frank Lloyd Wright, Rudolph Schindler and Richard Neutra. All ground breaking innovators who paved the way for the what the current architectural press refers to as Mid Century Modern  (MCM).    During a brief stopover in the boiling pot, I happened upon an amazing house designed by ground breaking architect John Lautner. Driving around LA, I literally stumbled upon The Wolff House. Built in 1961, this cliff hanging house in the Hollywood Hills was being renovated and I was afforded a rare opportuniity to walk through a work of art in progress. After spending about three hours freely wandering, I came away inspired and somewhat intimidated by what was clearly a masterpiece by one of the true masters of modern residential architecture. Unfortunately, you can only view the house from the street today, unless you are brave enough to knock on the door and ask to take a peek.

Other must sees of great design include The Ennis House and La Miniatura (Alice Millard House) by Wright and The Pavilion For Japanese Art by the fantastical organic architect Bruce Goff. And no trip to Los Angeles can be considered complete without a visit to The Getty Center, designed by Pritzker Prize winning Architect Richard Meyer. The experience of riding the quiet, pristine monorail up to the summit of this world class museum with views of all of LA, as well as the Pacific coast, transforms you mentally and physically from the pedestrian/car infested world of an urban metropolis into an environment of intensely designed indoor and outdoor spaces for viewing and appreciating world class art from The Ancients to Futuristic Modernism. I recommend staying late and dining in the hilltop Restaurant. The glass enclosed space affords unequalled night views of the teaming city below.

One Side Trip & Taking The Road To Big Sur 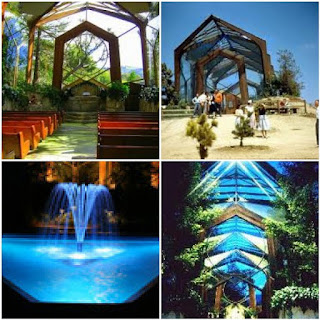 Before heading north to Big Sur - also known as paradise, I highly recommend a quick side trip to a piece of architectural design that is worth the roughly one hour trip to a dreamy section of the southern California Coast in Rancho Palos Verdes - The Wayfarer's Chapel. Also known as The Glass Church, the geometrically inspired organic design, by the son of Frank Lloyd Wright, Lloyd Wright, is sited seamlessly within the natural landscape of southern California and built into  the cliffs above the Pacific Ocean. As you would expect, it is immensely popular for weddings and other gatherings. It embodies that rare blend of architecture and purpose by creating a space that is architecturally beautiful and spiritually enlightening. After visiting this intimate place of worship, take time to find one of the many small eateries in and around Rancho Palos Verdes for some  Nomadic Sustenance before heading north to Big Sur - one of the last unspoiled places of incomparable beauty left in California.

Unless you love driving for six hours non stop, I highly recommend taking the  trek to the promised land at a slow pace. There are places to see and amazing things to do, so take it easy. Remember - half the fun is getting there. It takes longer, but hugging the coast through Malibu and picking up US 101 just outside of Oxnard will take you into Santa Barbara in about three hours. Once in Santa Barbara, you can check into any number of great boutique hotels for a little R&R and prepare for the trip north. One hotel that comes with a TABLET recommendation is The Presidio Motel, a high quality MCM place sensitively renovated to bring out the California Vibe before the crazies took over. And it's very reasonable at $120 per night. Another reasonably priced TABLET recommendation is Hotel Oceana. It's right on the Pacific and boast two pools.

Just A Little Bungalow On The Coast

Today you will be a full blown tourist, complete with all of the oohs and aahs that any normal human being expresses when faced with a true man made marvel. So hit the road early to beat the crowds at one of the most amazing architectural gems of California or anywhere else in the world for that matter- The Hearst Castle. Tour reservations are highly recommended. I normally shy away from tourist destinations, but this great house perched on the Pacific Coast of San Simeon is a must see for architects and anyone that wants to see how grand living was like by the uber wealthy and glamour set of the twenties and thirties. Heading towards one of America's most famous homes, you begin to see some of the spectacular scenery unique to the California Coast. You can go via an inland route for a quicker trip, but if you want to relax and enjoy the ride, stay on US 101 and US 1, also known as the Pacific Coast Road, for a visual road trip second to none.

As you turn off The Pacific Coast Highway onto Hearst Castle Road, you become acutely aware of  this unique landscape that came to be the ultimate playground for the rich and famous of the day. Such political and Hollywood luminaries as Charlie Chaplin, Clark Gable, Charles Lindberg and Joan Crawford were regular invited guests. Even the great Winston Churchill spent time in this grand castle, which served as the inspiration for the Xanadu mansion in the Orson Welles film Citizen Kane, a fictionalized account of the newspaper magnate William Randolph Hearst himself. What started out as a simple bungalow was developed into one of the most interesting studies in opulent residential design ever built. At 90,000 square feet, The Hearst Castle is not so much a house as a dream like confection of eclecticism rarely seen in houses of this scale. As the story goes, Hearst contacted the architect Julia Morgan to "build something upon the hill at San Simeon. I get tired of going up there and camping in tents. I'm getting a little too old for that. I'd like to get something that would be a little more comfortable".

And a little more comfort he got! Design and construction started in 1919 and continued without ceasing until 1947. Costing $200 million in today's dollars, this eclectic, over the top mansion contained fifty six bedrooms, sixty one bathrooms, nineteen sitting rooms, one hundred twenty seven acres of gardens, indoor and outdoor swimming pools, tennis courts, a movie theatre, an airfield and the world's largest private zoo.  Exotic animals can still be seen today. Morgan, a civil engineer as well as an architect, designed and directed the construction of a gravity-based water delivery system which transports water from artesian wells to provide fresh water for the entire castle, including the iconic outdoor Neptune Pool. Architectural critics have and will continue to debate the aesthetics and impact of this opulent house. However, the mammoth accomplishment and the visionary effort by owner and architect cannot be debated.

As we pulled away to head north on US 1, I was reminded of the definition of architecture by the nineteenth century art critic John Ruskin who said "Architecture is the art which so disposes and adorns the edifices raised by men ... that the sight of them" contributes "to his mental health, power, and pleasure". Stylistic arguments aside, after roaming the Hearst Castle, I would say that Ms. Morgan got it right.

This Week's Video Artist -  The Eagles - Combining great writing with tight instrumentals and vocals, no group captures the essence of the real and unreal of California than this band from, guess where?  LA.

Travel Quote Of the Week -“A journey of a thousand miles begins with a cash advance.” - Unknown

Get Up - It's Another Tequila Sunrise