A Little Hotel in The Big Apple - And This time We Took The Kids!!

Second in the "Quick Cures For The Blue Nomad" Series 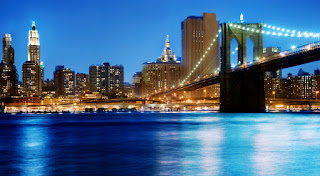 New York. The Big Apple. The Empire City. Gotham. By any name, the melting pot that is New York has more "stuff" packed in its five boroughs than any place you will ever visit. From Broadway to Brooklyn, from The Upper West Side to Coney Island, New York has every nationality, taste and experience, good and bad you could ever want or not. From the gaudiness of Times Square to the uber hipness of  The East Village, The City That Never Sleeps has everything from high culture to low and everything in between. It also has some of the greatest hotels and buildings in the world, including the greatest, most poetic of skyscrapers - The Chrysler Building. From its bloody and violent beginnings, New York rose to become the financial and cultural epicenter of the free world. Like the song says - If you can make it here, you can make it anywhere!

As our kids began to grow into adulthood and the possibility of far flung living arrangements became reality - Our son lives in Atlanta, our daughter lives in Austin, and we live in the hinterland of Madison, Florida - We decreed, sometime back, that we would take a trip at least once a year to celebrate as a family. Since our kids were small, travel has been an integral part of our experiences as a family. Today's post is about just such a trip we took to the Island of Manhattan to celebrate our daughter's twenty first birthday.

Travel with adult kids - and they will ALWAYS be kids  - in some ways, is more trying and stressful than traveling with actual little kids, because, they now have lives, jobs, school and most of all, opinions!! Just planning such a vacation is the equivalent of a NASA mission to an unnamed planet. And it becomes even more of a logistical challenge when everyone lives in a different place. So after getting flights from Tampa, Orlando and Tallahassee to the epicenter of insane air travel, Atlanta, finding each other, enduring an embarrassing accidental spill of a BIG coffee at the AIRTRAN gate, thereby ensuring that the eighty plus people waiting to board would have at least a somewhat humorous story to tell friends and neighbors about this guy that spilled this ginormous cup of coffee all over the check in desk at Hartsfield today - Hilarious!!! And needless to say, my loved ones were nowhere to be found as they quickly moved away from me as if they didn't know who this strange man was picking up the now empty Starbucks cup. After some hazmat cleanup by the ticket takers and me, we finally boarded for takeoff. 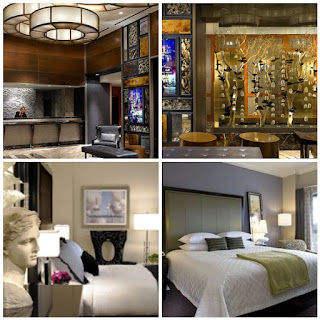 After a quick flight, we landed at JFK, gathered our luggage, hailed a cab and arrived at the boutique hotel The Muse without incident. As you would expect in a high end urban hotel, we were met by a perfectly attired valet and ushered into a highly rendered lobby of plush, highly detailed materials and furnishings to a concierge desk, where we were asked to have a seat and discuss our visit to The Muse and New York and finalize our check in, as our luggage was delivered to our room. The concierge was quick to point out various restaurants within walking distance, as well as other things to do in the second most expensive city in the world - London being Number One. Located in the heart of the Theatre District, The Muse is just off  Times Square and a few steps from Broadway. It's also a fairly easy walk to Central Park, one of the great urban parks designed by the Founder of American Landscape Architecture Frederick Law Olmstead. The sophisticated design of The Muse continues in the well appointed rooms with all the trappings one would expect from a one of a kind urban hotel located in the center of all of the action in the cultural capital of the Americas.


Since this was to be a weekend trip, we did not waste any time availing ourselves of the many things to do in New York. The helpful concierge was able to get tickets for the innovative, talented, hyper kinetic performance troupe Blue Man Group. With a unique combination of cutting edge music, acrobatic dancing and unimaginable contraptions made up of various pipes, tubes and drums, the BMG did not disappoint. After the show, we caught a late night dinner at a nearby restaurant and retired to the hotel for a much needed restful sleep.


You cannot go to New York without visiting one of the many museums. It seems that a museum or art gallery is on every corner. We decided to visit one of the great museums dedicated almost exclusively to modern art, the Solomon R. Guggenheim Museum. I was particularly interested in the Guggenheim because it is one of the few buildings in New York designed by America's greatest architect, Frank Lloyd Wright. Many books have been written on the amazing, complicated history of how the Guggenheim was designed and built, and the client-architect relationship between the great architect and one of the scions of modern art. The Guggenheim is a must see for  art lovers and architects alike. And its across the street from Central Park. 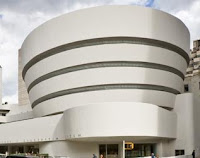 After the museum visit, we took a cab back to Times Square, snagged a window booth at the Marriott Marquis, with a panoramic view of  Times Square and celebrated our daughter's entry into adulthood. After an early dinner we headed out for another night on the town. Since New York has more comedy clubs than museums, we decided to check out the legendary Dangerfield's, where new comics test their chops and established stand ups try out new material. Live comedy should be experienced by all, especially at a place like Dangerfield's that books nothing but the best.


After a weekend of  great food, great entertainment and some amazing memories, we decided to pay a visit to the non-denominational Brooklyn Tabernacle Church, to hear the greatest gospel choir in America. What a way to spend a Sunday morning! I have many recordings by the BT Choir, but, to hear this amazing choir, live, under the direction of the innovative director, arranger and song writer Carol Cymbala was an experience I will cherish forever. What a fitting way to end a great weekend in on of the truly great cities of the world.

So Start Spreadin' The News, grab the kids and leave today, or at least by this weekend, for New York, New York.

This Week's Video Artist - Who better to represent the music of The Big Apple than  world class trumpeter Winton Marsalis, Artistic Director of Jazz at Lincoln Center ?

Travel Quote of the Week - A hundred times have I thought New York is a catastrophe, and fifty times: It is a beautiful catastrophe. - Le Corbusier Architect