This Place Isn't Strange Is It? 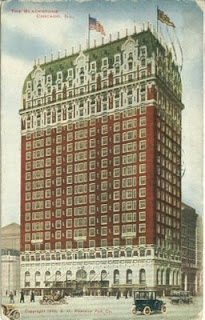 After a three minute conversation with the manager of The Blackstone Hotel just off Lake Michigan, I was assured that the hotel was everything that was described in various travel guides to Chicago. This included its history as a renown hotel for the rich and famous, movers and shakers and glitterati of the 20's, 30's, 40's, 50's, ad nauseam.  It also included my question concerning the final sentence in the description in one particular travel book, which stated that the upper floors were inhabited by The Transcendental Meditation Foundation, or at least a branch, founded by a really famous guy, the Maharishi Mahesh Yogi, spiritual guru to the likes of John Lennon & The Fab Four. According to followers, Transcendental Meditation is "the march of the mind to its unbounded essence". I once knew a guy who practiced TM every day. Very strange. My direct question to the voice on the other end was - This place isn't weird is it? To which she replied - Oh no sir, the "TM" floors are completely separate from the lower floors of the hotel and, as you know, the hotel is one of the most famous in all of Chicago. Note to self - In the absence of overwhelming evidence that a particular hotel is not just old - If it was built in 1909 and at least seven presidents slept there -  run don't walk!

Keep in mind that this trip to Chicago was taken before the internet, or at least before Google, so one depended on travel books and other sources for hotel information. And, this Beaux Arts beauty has since been purchased, completely renovated and re-opened as a Marriott Renaissance Property in 2008. Presumably, things have improved. I'll let you know if I ever stay there. However, as to our visit, none of the travel books we used got the memo on The Blackstone. After the phone call with the very nice lady, I just kept telling myself and my wife - Presidents from Harding to JFK have stayed there. Monroe, Hepburn, Capone, Ike!! It must be good - right? Read on.

After a quick train ride on the 'L' from O'hare, we took a short cab ride from the train station to the famous and what was soon to be - infamous Blackstone Hotel. As we pulled up, the first thing I noticed was the torn awning in front of the vintage Beaux Arts facade. In addition, I saw a large contingent of high school kids with all manner of horns, drums and uniforms. My experience has been that when you combine a torn awning with a large contingent of teenagers, with band instruments, who are also guests, the hotel is probably not on any "Nomad's Places To Sleep Before You Die List". Nonetheless, we gathered our luggage and headed into the lobby. As we passed by a young woman dressed in white linen from head to toe, sitting barefoot on the grand staircase staring into space, I started to think that maybe the lady on the phone was not completely candid. Then, as we entered the lobby, it hit us.The heat!! The lobby was a balmy 78 degrees. But that was OK since, directly behind the front desk, there was a very, very large pedestal fan with wind speeds north of 20 mph to cool patron and staff alike.  As we checked in, I was beginning to get that sinking feeling that we were playing movie roles in a very dark comedy. It's funny to watch but not particularly humorous to actually be in the movie.

The Room, The Phantom & Joe Pesci

One of the many features listed in various travel books was the "complete" renovation of this 1909 grand dame of the privileged set of yesteryear. After check in, we stepped off the elevator into what appeared to be a wholly renovated space. New carpet, some new paint and air conditioning. The hot, humid lobby and the strange people hanging around started to fade into memory. However, as we quickly found out, the "renovation" stopped at the threshold of the door to our room. When the door opened , I could actually hear the soundtrack from Planes,Trains and Automobiles when Neal and Del checked into the El Rancho. Old floors, old rugs, very old bed and "vintage" bathroom fixtures. Interior design circa 1975 was the over arching theme. Motel Six with ten foot ceilings. After inspecting the room and the bathroom, I said to my wife - At least it's clean.

Since the hour was late, and we had dinner reservations and tickets to see The Phantom of The Opera that evening, we stashed our stuff and decided to clean up for the evening on the town. As I was sorting through my stuff, I heard my wife say - "Come here, you have to see this". As I walked into the bathroom, I discovered the real world meaning of "vintage" as rusty water flowed out of the faucet. However, rather than panic, we patiently waited for the water to clear up, which, thankfully, it did. As we were getting dressed, I decided to turn the TV on to see if we could get some info on the comings and goings in Chicago Land. There was a slight problem. I quickly discovered the volume knob did not work. And it was very, very loud. When I answered a knock at the door to find a sixteen year old tuba player politely asking me to turn the volume down, I had to explain to him that that was not possible. To be accommodating, I simply turned the violating box off and enjoyed the sounds of tubas, trumpets, clarinets, etc. wafting throughout the hotel. I think the entire band was on our floor. How special.

As we headed out to dinner and a fabulous production of Phantom, the travail of The Blackstone quickly faded. Upon returning after our night on the town, I told my wife I was going downstairs to rustle up a coke. This frozen in time hotel had no vending machines of any kind. However, I was in luck. The "diner" just off the lobby was still open or so I thought. As I walked up to the counter to order a coke, the man behind the counter said they were closed. Rats, I thought! I am really thirsty. Then out of the corner of my eye, I saw a small group of black leather jacket clad guys that could  only be described as Goodfellows. The "made guy" of the group, a Joe Pesci look-a-like, says to the bartender - Yo, Give da man his coke - no chaage! I said thanks, took my free coke and quickly returned to the room with the loud, now silenced TV and squeaky bed and finally fell asleep.

We Gotta Get Out Of This Place, If It's The Last Thing We Ever Do! 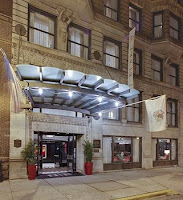 I awoke early, found the phone book and began perusing for alternate digs. There it was, glowing on the yellow page. A possible place of refuge. A short cab ride just around the corner - The Hyatt On Printer's Row. I quickly dialed the phone and presto! They did indeed have a room. We packed, checked out and said our goodbyes to The Blackstone  and Mr. Yogi and his minions. As we arrived and checked into our new, well designed and appointed home away for home, I was pleasantly surprised to find a small boutique hotel located in the heart of the big city. This very well detailed hotel did not disappoint and provided us a welcomed change from the previous night's stay at the ancient Blackstone. In the interest of full disclosure, The Hyatt On Printer's Row has since become a Wyndham property and, as such, I cannot vouch for its current status. Although the reviews I have read are quite good. As we enjoyed the rest of our stay in the greatest architectural city in America, Chicago became my favorite American City. We have been back many times to the stomping grounds of some of the world's greatest architects and some of the most stunning buildings in the world. The Art Institute of Chicago is a must see for art lovers and The Auditorium Theatre, the masterpiece designed by Dankmar Adlar and Louis Sullivan, is home to the world renown Joffrey Ballet. And if highbrow is not your cup of tea, check out the comedy troupe Second City. It will bring tears of uncontrollable laughter.

After three days in the big city at the very cool Hyatt On Printer's Row, we headed back to Florida with great memories we still laugh about today. As my travel companion - Susie, you remember Susie - is fond of saying - "Bad Beginnings, Good Endings". A woman of few, yet wise words, indeed!

Video Artist of The Week - Who better to represent Chicago than the rock band with horns - Chicago. After four decades and numerous personnel changes, this great band is still recording and touring. I wore out Chicago Transit Authority in college.

Travel Quote of The Week - I have struck a city- a real city- and they call it Chicago......I urgently desire never to see it again. It is inhabited by savages.  Rudyard Kipling  - Hmm - Must have stayed at the Blackstone!!