RANDOM VAGABOND ALERT - ANOTHER LOSS FOR ARCHITECTURE AND NOMADS ALIKE 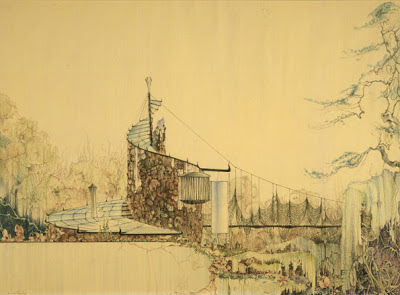 In 1978, while a grubby architecture student, I had the pleasure of hearing a lecture by the great master architect Bruce Goff in my final year of architecture school. At the age of seventy four, with his multi-colored coat and bola tie, he was the embodiment of the eccentric genius we had all studied since our freshman year. He spoke with great passion as he explained the ideas and methodologies behind some of the most cutting edge, organic and eccentric buildings ever designed and built. His understanding of the nature of materials, architectural form and the synergy between structure and space was truly exceptional.
With over five hundred building designs to his credit - half of which were built - Goff had a long and remarkable career as a  true practitioner of organic architecture. From his early correspondence with Frank Lloyd Wright, the father of organic architecture, Goff became a true iconoclast in the world of architecture, designing some of the most idiosyncratic buildings that critics often found shocking. One of the most iconic and famous houses, designed and built between 1950 and 1955, was the Bavinger House. This exotic house, built by the artist/owner, Eugene Bavinger, over a five year period, embodied the limits to which true natural, organic architecture could go.


Goff's Masterpiece Is Gone
Imagine my surprise when I discovered - while developing an itinerary for a southern Mississippi- Arkansas-Oklahoma-Texas-Louisiana road trip - that this iconic masterpiece is gone. It was one of the places I always planned to visit, but, for a variety of reasons that I don't even remember now, I never seemed to make it happen. As we were planning our June South Loop To Austin Tour, I discovered that the location of the Bavinger House was just a couple of hours from the completely renovated and updated Inn at Price Tower by Wright, a hotel we plan to stay in on our road trip. Then, much to my chagrin and utter disappointment, I discovered that this rare work of true architectural genius is no more. Many conflicting stories postulate a variety of reasons for the demise of this great house - from extensive storm damage to the son of the original owner actually tearing it down! It is very disconcerting to architects and lovers of great design when any work of architecture, particularly one so well known, is allowed to be destroyed by age, lack of care or modern development. In my home town of Tallahassee, The George Lewis House, the only house designed by Wright in Florida, has been vacant and allowed to slowly degrade for years. One can only hope that we don't lose  another modern architectural masterpiece due to neglect or modern times.
From the beginning, this blog has been about the importance of design and architecture as something to be enjoyed from afar as well as experienced intimately, as you rest your mind and your soul in places of environmental distinction. Frank Lloyd Wright called architecture the mother of all the arts. And no work of architecture has the impact on our lives like residential design. Visionaries such as Wright and Goff have given us timeless treasures that, if properly cared for and utilized, show inhabitants and patrons alike that great architecture is important to an enlightened culture and the enhancement of our daily lives.
From The No Ticky Tacky Bunker
d.l.stafford
thenomadARCHITECT
Posted by D.L.S.architect at 11:57 PM