MUSEUM DAY IN MADRID - GUERNICA AND TAPAS TO BEAT THE BAND

It Always Helps To Know A Guy (or girl) That Knows A Guy
One of the most impressive things about The One Shot I raved about in my last post on Madrid was the staff. The young ladies at the front desk seemed to know everything about everything in the Prado area. Waking up with reduced jet lag our second day, we asked about a place for breakfast. They pointed us to a very small café just down the lane - D.O.C.C. Madrid - Perfecto! As we were served by a most helpful and resourceful barista/manager of this 10-12 seat eatery, it became apparent that the Spanish are very accommodating people, even with Americans who speak embarrassingly bad Spanish. 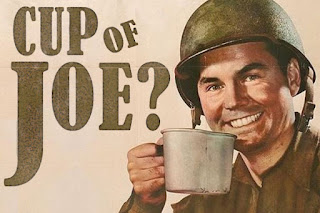 However, one thing must be noted. Call me an Ugly American if you like, but, the Spanish do not have the coffee thing figured out. This is going to sound soooooo uncharitable - but we are all about the truth here at TNA. The coffee served in virtually all restaurants and coffee shops in Spain is Café Con Leche - half coffee and half warm milk. It is always luke warm and tastes rather odd to a palette that is accustomed to very hot coffee with a small amount  of cream and sweetener. I know what your thinking - What an unliberated American  toadie, right? I apologize in advance for my embrace of that symbol of American coffee excess. That's right - the only real coffee I had in Spain was purchased at - you guessed it - Starbucks. I should probably have my vagabond credentials suspended for not "acting like a local", but that's my story and I'm stickin' to it. I don't care what Rick Steves says. Trains and Tapas - Sí. Coffee - No!

Would You Like To Go To The Museum Today Mi Amor?  Sí She Said

After breakfast we hailed a taxi and said Hola! Reina Sofia, por favor. Ten minutes later we pulled up to Madrid's national museum of modern art. This former 16th century hospital boasts permanent and temporary exhibitions of Spanish and other international artists. Works  by renowned painters and sculptors Joan Miro, Donald Judd, Max Ernst and Georges Braque, to name just a few, ensure that the visitor will see some of the most provocative, ground breaking art of the last century.

Enjoying the many works in Madrid's largest and best known museum, we strolled into the room in which is hung one of the truly great paintings by one of modern art's greatest painters. Many art lovers and critics alike view Guernica as Pablo Picasso's greatest work. Upon seeing this enormous painting up close and personal, it is hard to argue against that point of view.

An apt description of the painting, its scope and effect on the viewer is best summarized by travel blogger Katie Hammel in an excerpt from  one of her articles entitled Viewing Guernica at Madrid’s Reina Sofia Museum:

Picasso’s Guernica is one of the most visually stunning paintings in the world, and one that is best appreciated when viewed in person. At first glance, the painting looks like chaos – all hard lines, blunt angles, and cartoonish scenes of animals and people. But when you look at the details, you begin to see more. Here’s a woman, grieving for the child in her arms. There’s a fallen man, his broken sword lying beside him. The painting depicts the bombing of Guernica (in Basque Spain) during the Spanish Civil War. The Guernica takes up nearly an entire wall of the museum, and at 11 feet tall and nearly 27 feet wide, it is simply massive.

After the Reina and a light lunch, we returned to the Prado area and the beautiful Neptune Fountain. We then decided to do what all good tourists do - hop on a Hop On - Hop Off  Bus for a grand tour of Spain's capital city. Never having done this rather "touristy" mode of sightseeing before, we both agreed that it is a great, inexpensive way to get an overview of a city, its architecture and its neighborhoods. Plus - you can rest your weary feet while enjoying the view. 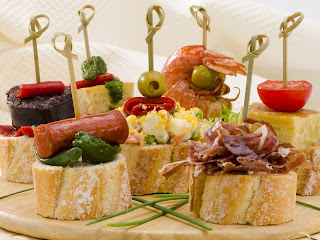 As I said earlier - It always helps to know a guy or girl who knows....you get the picture. Once again, the dynamic duo at the front desk did not disappoint when we asked for dinner suggestions. At the end of a full day of museum stalking and sightseeing we were in need of some really good food. We took a short stroll from One Shot up Calle del Prado and arrived at the absolutely slammed, well designed tapas restaurante LATERAL around 8:30 PM. After only a few minutes, we were ushered to our table amongst many apparently satisfied diners, eating and drinking like the locals. Now - I am, by no means, an expert on Spanish food, tapas or otherwise. But, in this Americano's humble opinion, the numerous courses of spring rolls, calamari, etc., etc., etc., along with a nice bottle of  Tempranillo (Spain's most common grape), were superb in every way. And I could have sworn I saw Hemingway sitting in a corner by himself drinking a small glass of sherry - Just kidding. 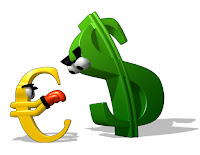 And the prices, with the euro at an all time low against the dollar, were  muy barato - actually downright miserly. Take heed my fellow Nomads, if you are looking for a place that will serve you well for very little then get on that plane asap.

As we walked back and prepared for another night's sleep in our little trozo de cielo at The One Shot, we mentally crossed the fabulous Guernica off the Nomad Bucket List. The memory of that profound work of art and strolling the narrow streets of "Magical Madrid" is now
permanently etched in our collective Nomad heads & hearts.


Next up - A Bucket List Day Trip - The Windmills of La Mancha.

Spanish Lesson of The Week - Spain is downright cheap. That's right fellow Vagabonds, compared to Italy, France and the UK, Spain is one of the lowest cost countries for Nomads looking for a deal. Excellent wine can be had for $3.50 a glass and four star hotels can run as low as $125 a night. And, as of the date of this post, the dollar is a very low $1.12 to the euro. Take that California!

Video Artist of The Week - Joe Cocker, a true R & B, Soul and Rock & Roll legend could be heard in bars and cafes in the Land of Conquistadors. They love that rock and roll in Spain!
Posted by D.L.S.architect at 11:52 AM