BRIAN SETZER JUST FLAT OUT ROCKS - NO. 22 ON THE CHRISTMAS COUNTDOWN 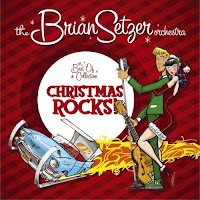 If you were of the age of accountability, teenage or older, back in 1979, you will remember the Rockabilly Band The Stray Cats fronted by a guy with a very funky haircut - he still has it - Brian Setzer. With rock credentialed vocals and a blazing guitar style, he and his band posted a few hits - Stray Cat Strut, She's Sexy + 17 and Rock This Town.

Since then, Setzer has created a unique blend of rock & roll and big band with his current traveling show THE BRIAN SETZER ORCHESTRA. His live shows are a blast. When we saw him, there was a designated area on the floor of the arena for dancing, and the crowd danced up a storm.  He opened for none other than Bob Dylan. How's that for completely weird? Of course, Dylan was amazing as you would expect. But the real hit of the night was this insane orchestra and this funky lead singer/guitarist with a big pompadour doing this utterly unique blend of rock and big band.

So today's Countdown number is for all ages that like great music that makes you want to get up and move. This cut is from his Third Annual Christmas Extravaganza 2009. Just crank it up and hit the floor with Dig That Santa Claus and Boogie Woogie Santa Claus. I am sure Elvis and Basie would approve.


HOPE YOU HAVE A MERRY MERRY ROCKIN' CHRISTMAS!!