NO. 11 ON THE 2017 CHRISTMAS COUNTDOWN - SOME HUMAN NATURE FOR A WHITE CHRISTMAS PLUS A BONUS 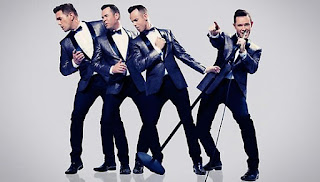 I pride myself on knowing about the latest and greatest singers, groups, bands, etc.. But today I found someone I didn't know about until today. The group HUMAN NATURE has been around since 1989. The Australian Boy Band known is 4 TRAX has evolved into one of the coolest singing groups I've heard in a long time. With spotless vocals and cool moves, these guys know how to deliver tunes in the vain of the great Hi-Lo's from the 50's who essentially invented the stylized vocalizing heard today by groups such as Human Nature and PENTATONIX. With multi platinum releases and a history of touring with the likes of Celine Dion and Michael Jackson, these guys have proved their staying power with great arrangements and great singing.

And as a bonus, you'll hear Bing Crosby sing White Christmas from the classic 1942 Christmas film Holiday Inn. It is believed to be the highest selling single of all time with over 100 million copies sold. Even though there is no snow here in God's Country, it is white in many places in the good old USA. Stay warm and enjoy today's tunes.

NO. 11 ON THE 2017 CHRISTMAS COUNTDOWN - WHITE CHRISTMAS BY HUMAN NATURE & A BONUS - BING CROSBY  SINGS THE GREAT SONG FROM THE CLASSIC MOVIE HOLIDAY INN.


I have said it a bazillion times - great music lasts forever from generation to generation. Merry Christmas.