NO. 5 ON THE CHRISTMAS COUNTDOWN - THE KING DOES CHRISTMAS 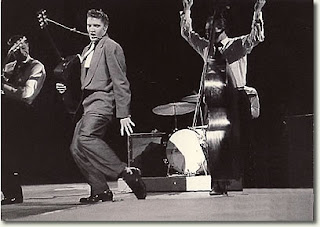 Elvis - The King of Rock and Roll, was the first artist to combine blues, country and attitude for a brand new genre of music - Rockabilly. In 1956, Elvis went from a virtual unknown small town performer to a national sensation who changed popular music forever. With three No. 1 hits, Heartbreak Hotel, Don't Be Cruel and Love Me Tender, his good looks, charisma and, in many people's opinions, lascivious dancing, Elvis became a national phenomenon selling over $22 million ($199 million in today's dollars) in records in 1956.

If you look at old clips of Elvis in 1956, one thing becomes obvious - the girls loved the guy. He also appeared on television 11 times and did over 143 live performances. And after sixty years, since his first brush with super stardom, Elvis still ranks in the Top Ten selling records year after year. With over one billion records sold, Elvis remains the top selling artist of all time.

The COUNTDOWN tunes you will see today come from his 1968 TV show - The '68 Comeback Special - with Elvis performing the first "unplugged" performance that became the rage later by multiple artists. Just click the link if you want to see the entire show.

So please enjoy NO. 5 ON THE 2017 CHRISTMAS COUNTDOWN - ELVIS PERFORMING SANTA CLAUS IS BACK IN TOWN & BLUE CHRISTMAS IN BLACK LEATHER FROM HIS '68 COMEBACK SPECIAL.

And for a bonus, here is Elvis performing Here Comes Santa Claus with a video of multiple clips of The King showing why he is still considered the King.

I was seven in 1956 and I still like Elvis.   You better get ready, it's only 5 days until. Merry Christmas.