A BIG BAND, SOME GREAT GUITAR RIFFS AND A LITTLE BOOGIE WOOGIE - MERRY CHRISTMAS - NO. 11 ON THE 2018 CHRISTMAS COUNTDOWN 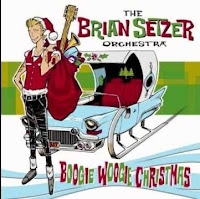 Brian Setzer, the former front man for the Stray Cats has developed into a great entertainer, combining big band music and amazing guitar for great performances. I had the pleasure of seeing this consummate musician and his orchestra when he opened for none other than Bob Dylan. With his skills on electric guitar and his growly vocals, he adroitly traces his music back to the best of big band music and  fifties rock and roll.

Today's tune is an outstanding big band arrangement of a great tune that was written by Leon Rene' in 1948. This arrangement has some of the best solo work you will ever hear on guitar, trombone and trumpet.

Enjoy NO. 11 ON THE 2018 CHRISTMAS COUNTDOWN - BOOGIE WOOGIE SANTA CLAUS BY BRIAN SETZER AND HIS ORCHESTRA.