WHITE CHRISTMAS MUST BE SUNG ALL THE TIME DURING DECEMBER - ENJOY NO. 18 ON THE 2021 CHRISTMAS COUNTDOWN 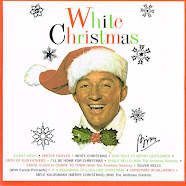 Today, I am posting three different arrangements of one of the most classic Christmas songs ever recorded. Written by the incomparable Irving Berlin in 1942, the composition won an Oscar at the 15th Academy Awards. That's before I was a gleam in my mom and dad's eyes! The song was originally recorded for the film Holiday Inn in 1942. However, a new version of the song was featured in the 1954 film White Christmas. From that point on, this simple song became a Christmas standard.

The first video of this classic is in black and white, from 1951, featuring Bing Crosby and Peggy Lee. The song still holds the record for the highest selling single in recording history - Fifty million copies sold. So enjoy - WHITE CHRISTMAS by Bing & Peggy in 1951 - NO. 18 on THE 2021 CHRISTMAS COUNTDOWN.

Then the song was performed in a major scene in the movie White Christmas featuring Bing Crosby, Danny Kaye, Rosemary Clooney and Vera-Ellen in 1954.
And last but not least, enjoy a new contemporary jazz vocal version of this classic tune by the Australian pop-vocal group Human Nature.
So, I hope you enjoy these different arrangements of White Christmas, even though here in God's Country we get snow about every ten years or so. Incidentally, my parents gave me Bing Cosby's White Christmas album when I was a kid and I listened to it every night during Christmas season. I still have it. Great music!
Merry Christmas
D.L.Stafford
thenomadARCHITECT
Posted by D.L.S.architect at 10:36 AM