IT'S FRIDAY - HERE'S A LITTLE TUNE TO HELP YOU ENJOY THE WEEKEND - FAMILY & CHRISTMAS - PERFECT - NO. 24 ON THE 2022 CHRISTMAS COUNTDOWN 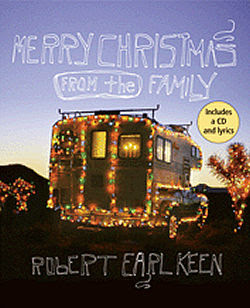 Today's Classic Christmas Tune has been on the Top 25 Christmas Countdown every year since it started ten years ago. I found a different video featuring an acoustic version of Robert Earl Keen and two other players performing this elegant and ironic tune about the joys and blunders of Christmas Celebrations some families may have. Every year, I get comments on this particular song. Somehow, people seem to relate to its raw, funny take on out-of-control parties.

This song was written and recorded in 1994 on Keen's album GRINGO HONEYMOON. Keen and another great Texas Troubadour, Lyle Lovett, formed a lifelong bond when they were students at Texas A&M University and played and composed together on their favorite porch.

Of course, the porch is long gone now. As Keen said - quoting a line from Joni Mitchell's Yellow Taxi - "They paved paradise and put up a parking lot" to which he added "That encapsulates the whole thing". After a career spanning almost forty years Keen embodies the true innovation of great Texas artists.

So, enjoy and have a laugh as you listen to No. 24 on The 2022 Christmas Countdown - MERRY CHRISTMAS FROM THE FAMILY.

And for all you seasoned Vagabonds that want to see the old video of this great, funny tune by this unique singer/songwriter, please enjoy the original video from October 2006. With over six million views, this humorous ode to insane families who party, particularly at Christmas, should make you smile.

Merry Christmas To Your Family! LOL!