NO. 9 ON THE 2022 CHRISTMAS COUNTDOWN - A TRIBUTE TO MILITARY AMERICAN MILITARY SINGERS & BANDS

TODAY WE HONOR THE US MILITARY MUSCIANS, SINGERS, BANDS AND ORCHESTRASWHO REPRESENT THE GREATEST MILITARY FORCES IN THE WORLD 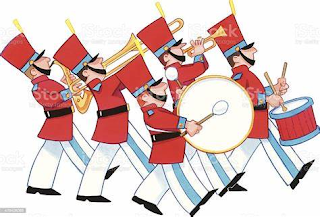 The world has benefitted from the brave men and women who fight for freedom and represent our nation with immense pride and honor. There are musical organizations in every branch of service in the US with amazingly gifted singers, bands and orchestras that let us know that they are with us and for us as Americans.
First up on today's post features The US Army Band. The band was formed in 1922 and is often referred to as Pershing's Own. It is the premier musical organization of the US Army with nine different performing ensembles. Today, they perform BLUEGRASS MEDLEY.
Second on today's post is a rousing arrangement of GO TELL IT ON THE MOUNTAIN by THE UNITED STATES NAVY BAND with some power singers sharing this classic Christmas tune.
And one last Christmas set of tunes from the Marine Corps Chamber Orchestra performing Sleigh Ride and The Marine's Hymn on The David Letterman Show in 2012.
Play and sing for The Good Ole USA.
Merry Christmas to all those men and women around the world representing our country with honor.
Happy Holidays to All.
D.LStafford
thenomadARCHITECT
"Christmas, in its final essence, is for grown people who have forgotten what children know." -Margaret Cousins