After Wales I Didn't Think It Could Get Any Better - But Then There Was Keswick , Howe Keld and The Lakes

After sleeping and eating at the Cross Foxes Hotel - and marking it down as an absolute Nomad Keeper - we headed north through Snowdowdonia towards our destination for the night in the very small, very hip, very non-tourist village of Keswick. As we were driving through Northern Wales back into England, I was struck by the beauty and diversity of the countryside in the UK - and water is everywhere!! It seemed like a river, lake, stream or waterfall was around every bend as we wound our way through the UK's largest national park.

Another note here about driving in England. I highly recommend searching out the back roads for obvious reasons - less traffic, more interesting scenery and the occasional serendipitous adventure into the unknown - and if you are a slow driver - you will not be well liked on ANY highway, large or small. Of course that worked fine for me, since I consider speed limits to be a minor inconvenience intended for other drivers. As we got closer to Keswick, we had to traverse the M6 Motorway. We did get to see the Irish Sea, albeit from a distance. The point is - getting there is half the fun - so go where nobody else is going - you'll thank me later!

Back to Keswick and The Lakes. Keswick has everything you want in a small village. Great old buildings, narrow cobblestone streets, great little shops and friendly people. What it does not have is a lot of tourists. This makes it a perfect stop for anyone who wants to enjoy the vibe of a small English town without the usual kitsch in every other storefront. However, Lake Derwentwater is the star of Keswick. Surrounded by wooded fells, it is one of the major bodies of water in The Lakes District National Park. 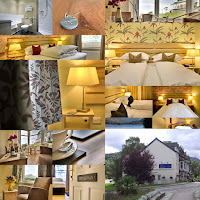 Upon checking into the recently renovated and very well appointed Howe Keld B&B, it became very apparent that the old school of B&B's with the bath down the hall and chintz curtains most people associate with England, is being replaced by places like The Howe Keld with a new, modern clean design, a killer bathroom and all the accouterments you would expect in a small high quality hotel. And the personal attention afforded us by the owner and his staff was five star caliber. From the efficient check-in to the great breakfast in the well appointed, light filled dining room, the service was excellent and always delivered with a smile. It was great to talk with the owner about the new design and renovations that have been completed to put this small hotel on the map. With design touches like locally designed and built furniture and beds to die for, Howe Keld is just the kind of place that any Nomad is looking for. 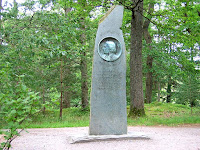 After getting settled in, we decided to to take a walk through the woods along the lake to Friar's Crag, a promontory overlooking this intensely beautiful body of water. Historians tell us the name came about because it was the point of embarkment for monks making a pilgrimage to Saint Herbert's Island, located south west of the crag. In addition to its beauty and peacefulness, the crag is also known for it's association with the art critic, social thinker, poet and artist John Ruskin, who once said that Keswick was almost too beautiful to live in. There is a stone sculpture to commemorate the bond between this lovely lakeside village and this observer and chronicler of art, history and social theory. In addition to the lake, the village and the hotel, there are many other things to do while in this very cool little lakeside town. The Theatre By The Lake is the area's only year round professional theatre. Other items on the To Do List include The Keswick Film Festival in February, The Literature Festival in March and The Keswick Jazz Festival in May.

After returning from our walk along the storied Lake Derentwater, we returned to our room and asked the owner where we might eat. His recommendation for a small restaurant, only a ten minute walk from the hotel, would be the culinary highlight of our tour of Great Britain. I have always felt that the best source for what to do, where to eat, places to go, etc. is the person who runs the hotel you are are staying in. First, they are local. Second, they get continual feedback, good and bad, from other guests. His recommendation, A Different Taste, a small bistro that seats about thirty, was exactly what the doctor ordered to finish the great day we had exploring Keswick and its environs. When we first arrived, there was only one couple in the place, so we were a little concerned. Well, an hour later, that concern proved to be utterly unfounded, as it became packed with other diners who know where to eat in Keswick.  From the appetizer to the main course, we all agreed - A Different Taste was an absolute member of the Nomad's Well Designed Road Food Hall of Fame. With a menu that changes daily, everything is prepared with fresh, local ingredients by a top chef and served by an exceptional staff.

After dinner, we enjoyed a leisurely stroll back to the hotel which brings to me to the single most important aspect of any hotel - the bed. Travel can be a very intense, physically demanding experience. Walking everywhere, climbing stairs and mountains or roaming around some ancient ruin can make a body tired. This means that the bed you sleep in must be comfortable in order to allow quality R&R for the stalwart Nomad. With exceptionally comfortable beds,  Howe Keld makes sure that when your head hits the pillow, you are going to have nothing but sweet dreams until morning. After a relaxing night of sleep, we were treated to an outstanding breakfast served by a friendly, efficient staff in the intimate dining room.

So there you have it - The Third Leg of our UK Tour. Great hotel, great food and a great location in one of the most charming and beautiful areas of the realm. Next up - Scotland and the beautiful urban enclave of Edinburgh.

Travel Quote of The Week - "One certainty when you travel is the moment you arrive in a foreign country, the American dollar will fall like a stone". Erma Bombeck (Editor's Note - I have said it before - Insanely true in Great Britain)