"There in a beautiful forest was a solid, high rock ledge rising beside a waterfall, and the natural thing seemed to be to cantilever the house from that rock bank over the falling water..." - Frank Lloyd Wright in an interview with Hugh Downs, 1954 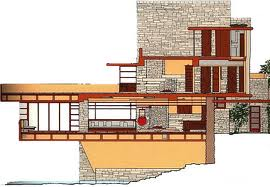 Every architect, at some point in their life, must make the pilgrimage to what many consider, including this architect, to be the greatest work of modern architectural residential design ever built - Fallingwater at Bear Run, Pennsylvania. With a back story worthy of a mini-series, this great American house, designed and built between 1935 and 1937, came to be as a result of two men - Edgar Kaufmann, a self made plutocrat and patron  and Frank Lloyd Wright, an architect who, at the age of seventy, had become largely irrelevant to the world of architecture, etched his position as America's greatest architect in stone and concrete. The "house on the waterfall" captured the imagination of the architectural press and subsequently became  the most visited work of modern residential design ever built in America.

Only Two Hours To Make A House! 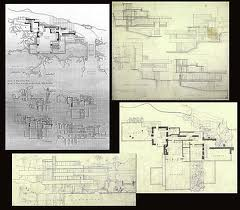 The stories behind the design and construction of Fallingwater have been chronicled in numerous books, documentary films and countless design magazines. Separating fact from legend is not always easy in the course of studying such an enigmatic figure as Wright. In addition to being America's greatest architect, he was a philanderer, a terrible businessman and an unabashed self promoter. And the technical construction problems that plagued the house have been well chronicled. But those issues are beyond the scope of today's post. As an architect, I have always been intrigued by the creative process. Every architect, painter, sculptor, writer or musician develops their own methodology of creating their work.  Upon talking with his client on the phone and learning that he would be at his studio in a few hours, Wright sat down to "design" what would come to be known as Fallingwater. Verbal accounts of apprentices present at the time, as chronicled by Franklin Toker in his definitive "biography" Fallingwater Rising, give insight into the particular genius of Wright as he created America's most famous modern house:

"Wright took three sheets of tracing paper in different colors, one for the basement, another for the first floor and a third for the second floor, and sketched it to a scale of one-eight inch equals one foot. We were all standing around him. I'd say it took two hours."

"Wright hung up the phone with Kaufmann, briskly emerged from his office, some twelve steps from the the drafting room, sat down at the table set with the plot plan (of the topography of Bear Run), and started to draw. First floor plan. Second floor. Section, elevation. Side sketches of details, talking sotto voce all the while. The design just poured out of him. "Liliane and E.J. will have tea on the balcony...they'll cross the bridge to walk into the woods..." Pencils being used up as fast as we could sharpen them when broken...Erasures, overdrawings, modifying, flipping sheets back and forth. Then, the bold title across the bottom: "Fallingwater." A house has to have a name....The basic design never changed.

The Pilgrim Asked - Where On Earth Will We Stay? 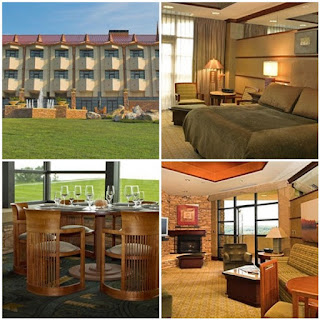 Like many of Wright's houses, Fallingwater is located in the hinterland. Due to its location about two hours from Pittsburgh in the Bear Run Nature Reserve, finding a nearby hotel, four star or otherwise, proved to be a challenge. After much searching on the internet, I landed on the very large, golf centered Nemacolin Woodlands Resort. And as luck would have it, one of their many properties was designed and built to emulate the one and only Frank Lloyd Wright. Falling Rock, the Wright inspired hotel on the Nemacolin property, provides a refreshing alternative to the Chateau Lafayette, a rather pedestrian copy of  The Ritz in Paris. Recently given the 2012 Forbes Travel Guide Five Star Award, the ample rooms, which overlook the Pete Dye designed Mystic Rock Golf Course, come complete with Wright inspired furnishings and showers that would be at home in any high end spa. There is also an excellent on site restaurant, Aqueous, that serves food a cut above typical "resort" food.

After a good night of rest and relaxation, we headed out early to make the twenty minute drive to Fallingwater. This area of Pennsylvania is bucolic in every sense of the word. The countryside is dotted with small farms scattered amongst rolling hills, rivers and forests. One of the most annoying realities of many great works of architecture, particularly houses, is that the environment they were originally designed and built in no longer exists. What once was an isolated work of art on a wind swept prairie is now in the middle of a suburb filled with over the top garish McMansions. Not so with Fallingwater. In 1963, the Kaufmann family endowed the house and surrounding property to the Western Pennsylvania Conservancy, ensuring that this famous house will always be appreciated in the unfettered natural beauty of its unique site with no built distractions. 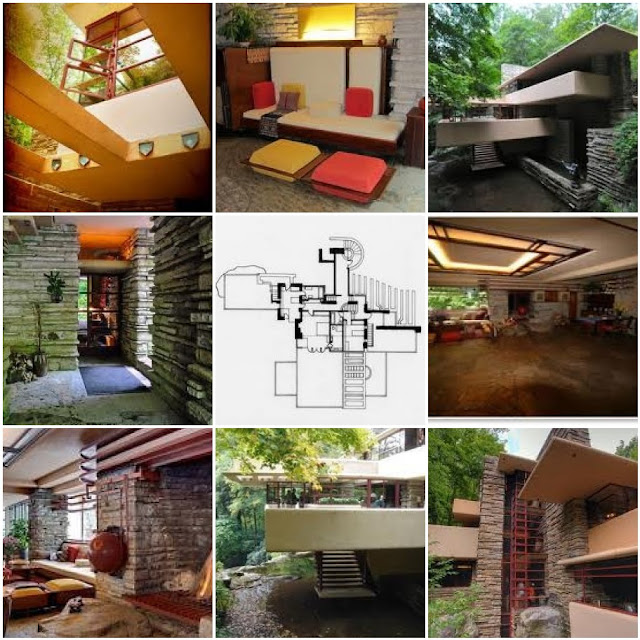 As you would expect, the Visitor's Center is designed to conform with the aesthetics of Fallingwater. Linear stonework, concrete and wood details abound. In addition, the cafe serves decent food for those who wish to take a load off before or after viewing the house. And of course, it sells  everything ever designed by, sketched by or thought of by Frank Lloyd Wright. Every piece of "organic", Wright inspired accessory, from ash trays to earrings, is available. This did not bother me, as the conservancy must spend an inordinate amount of money to maintain this unique work of architecture.

After picking up our tickets, we decided to grab a quick bite in the cafe, while waiting for our tour to begin. I recommend purchasing tickets before you go. One point needs to be made here about tours. While the regular tour gives you a chance to see this great work of art, I highly recommend the In-Depth Tour. This tour allows you much more access to virtually every space to see the entirety of the design and learn much of the thinking, planning and construction behind various spaces and details incorporated into the house. In addition, the group for this tour is much smaller, so you can appreciate the house with fewer distractions. In my humble opinion, it is worth more than the price of admission. 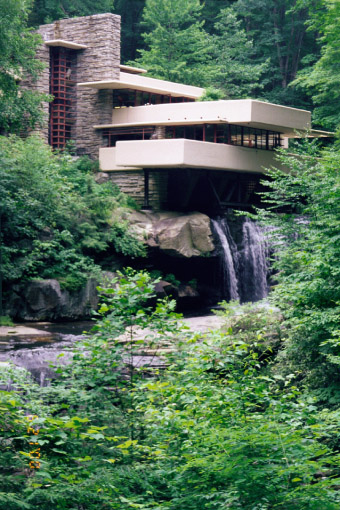 The tour begins about a quarter mile from the house. At the risk of sounding like an architecture geek, my anticipation of seeing this work of architecture that I had studied and read obsessively about as an architecture student, was very intense. Walking along the original car path towards the house, deep in the Laurel Highlands of Pennsylvania,  you take yourself back to a time when the Kaufmann family took extended vacations in what would eventually become the world's most famous modern house. And then you turn a small, slow curve to catch the first glimpse of this work of "Organic Architecture" set against the backdrop of ancient stone outcroppings. Massive stone walls support white concrete, gravity defying cantilevers reaching out over the cascading waterfall. As you walk across the bridge towards the entrance, the perspective begins to change and the multi-dimensional character of the house becomes more apparent. Once inside, all of the tenants of organic architecture become apparent. Modern and ancient. Cave like and light filled at the same time. And seamless detailing on virtually every surface. Fallingwater delivers on the promise that great design offers. From the massive central stone hearth to the terraces reaching out to the waterfall and the woods beyond, you simply do not want to leave this living work of art. And finally you walk downstream for the view of the most photographed image of this iconic house showing the concrete forms which seem to take flight over the water. Architecture geek indeed!

After spending the day at Fallingwater, we returned to the hotel for an excellent dinner, and rested up for the next day's excursion to another Wright designed house nearby - Kentuck Knob - an exquisitely maintained house designed by Wright in 1953 at the tender young age of eighyt six. Complete with an extensive collection of outdoor sculpture, it is worth your time to see this smaller house that Wright claimed he "shook out of his sleeve at will”.

So, if you want to spend a few days seeing one of America's great works of architecture and some of the country's most beautiful landscapes, Fallingwater is a must see for all Curious Nomads. And with The Nemacolin Resort nearby, you will have a great place to rest and relax at the end of the day.


Nomad Quote of The Week - Early in life I had to choose between honest arrogance and hypocritical humility. I chose the former and have seen no reason to change.  - Frank Lloyd Wright


Video Artist of The Week - Simon & Garfunkel - One of the most compelling duos to come out of the sixties. Great writing and amazing vocals made them a household name. And, they may be the only group to ever record a song about an architect -  So Long Frank Lloyd Wright. How's that for a seamless blend of journalism and the arts?


From Somewhere Deep In The Woods,,