Random Musings from A Committed Nomad

The First, The Best & The Worst

This week's post is, well, all about me. Or at least about me and the important people in my life. I have talked before about this architect's obsessive need to make lists. I have also been told by friend and foe alike that I generally do no know when to be quiet. That is one of the reasons I took up this adventure in journalistic narcissism. You know the song - I need a release, etc. etc. ugh!! Having said all that, I thought this week would be a great time to recount some memorable moments of travel I have experienced. Normally, I would come up with a plethora of insights on the unique qualities of a small hotel or other place of architectural quality down some road in a place I hope you have never been. And I know that my legions of fans have come to expect erudition & enlightenment on a weekly basis about traveling down the smaller road. But this week its all personal. So please indulge me my musings, random though they may be. I thank you in advance. 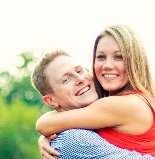 If the following list appears to be incomplete and random, it is. You will have to forgive me for not being intellectually on my game, as I am watching the clock on the wall as the seconds tick down to next Saturday at 5:30 PM when my smart, handsome, witty, fair haired son, Lance, will marry the equally smart, gorgeous, wonderful fashionista, Tara, under a large pecan tree at Vinewood Plantation just south of Atlanta in Newnan, Georgia. And let me just say, even though, as the father of the groom, I have been pretty much out of the loop, the organizational skills required in planning a wedding make planning a vacation look like ordering a Happy Meal at Mickey D's! The "kids" will be honeymooning at a small, ocean front resort in Barbados Tara found, by being a diligent and obsessive Nomad. We've discussed getting daily reports from Tara & Lance to share on The Nomad Architect. We shall see.

So Without Further Ado - A Random List of Travel Memories

First travel memory - Way back in the day - Ordering & then eating, all by myself,  a loaded hot dog with a side order of fries in a cone, then chasing it with an ice cold six ounce bottle of coke, followed by a Nutty Buddy ice cream cone from the mobile hot dog stand in front of the Castaway Motel on The World's Most Famous Beach - Daytona. The coolest thing about the beach was that people could drive on it. What a way to live for a seven year old!

First memory of traveling with a car radio - Riding late at night to Gatlinburg, Tennessee, to go camping in The Great Smoky Mountains National Park, my father would find the great radio DJ John R. on WLAC from Nashville on the AM dial. Sitting in the back seat cocoon of the big car, I heard music and "radio talk" I had never heard before. Rhythm & Blues from the likes of Muddy Waters and Howlin' Wolf and a raspy, gravelly aged voice broadcasting an array of eclectic "commercials" for everything from vinyl seat covers to hair cream. It seemed so exotic back then. 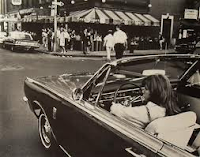 My first realization that there was another world  out there - Visiting New York with our father while on business was always a treat. I believe my penchant for wanderlust came to be when my father rented a bright red convertible and took an all day tour of New York City from Manhattan to Harlem to The East Village to The Bowery with the top down. With my mom in the front seat and my brother and I rubbernecking at every turn in the back, it was an experience I have never forgotten.

Favorite Disney World memory - After the sixth or seventh time riding with my daughter, Lauren, through It's A Small World , in one day, and sharing the simple pleasure of my baby girl being mesmerized by magic, I realized that life simply does not get any better.

Favorite sports memory - This didn't involve travel, per se, unless you consider the fifteen minute ride to the ball park travel. My son's first No Hitter. If you know anything about baseball, you must understand the depth of pride that that was my kid. Absolute proof positive that life simply doesn't get any better.

Coolest Small Hotel - On a side street, a few blocks from the Eiffel Tower, is the lilliputian Hotel Mayet. Everything about this cool little hotel is - well - cool and small. The rooms, the corridors, the two person elevator and, of course, the bathroom is designed for the little people. But I have never stayed anywhere that has more style and design. Every surface, every piece of art and every fixture is well executed. No detail is left to chance. The topper was the cave like breakfast room, in the basement, with bright striped vinyl clad floors inserted under an old stone vaulted ceiling. What a way to begin the day!

Funniest travel memory - Nothing like a road trip with the kids, right? On our way to Nashville we decided to take some R&R at the Dillard House, a family restaurant and small inn north of  Atlanta.  In addition to a great restaurant, they also have a small petting zoo of goats, rabbits and other farm animals for a pleasant diversion for NOWK's (Nomads with Kids). The day was a classic summer day in the South. Very hot and very humid. As the kids were being entertained by this particularly large bearded goat, we observed one of the truly unique happenings in nature, at least among farm animals. With sad eyes gazing in the distance, the goat slowly turned its head to the side and proceeded to "cool" himself by peeing on top of his head causing the four us to laugh uncontrollably. Had we had a video camera, we could have paid for the trip with our winnings from The World's Funniest Home Video. And to send us over the edge into laugh nirvana was watching another family with kids walk up to the goat and start petting it on the very head that had just been relieved upon. Now that's funny!

Most Romantic Place We Ever Slept - This one is hard. But at least tied for first place has to be The Cliff House on Whidbey Island near Seattle. Accessible by ferry, this amazing awarding winning house of glass and wood boasts killer views of Puget Sound, deep in the forest on the west side of Whidbey. It feels like the end of the world. After walks on the rugged, desolate beach or down the lane under canopies of massive douglas firs and redwoods, you get to return to this amazing piece of residential design to watch the sun go down and rest for the next mist covered morning. It's the perfect place to take the one you love. 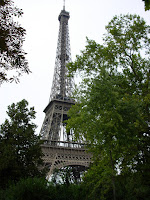 Most Favorite City - Hands down - Paris!. Paris has it all. Great boulevards and side streets to wander down. Because Paris has so few tall buildings, it has a human scale that invites you to investigate around every corner. The street side cafes, along with intimate public spaces, allow you to just sit and watch the world go by. And of course, you have the Eiffel, the Louvre and the Centre Pompidou. And last, but not least, the food. The perfect combination of art and artistry. 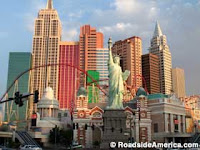 Least Favorite City - Also a no-brainer - Las Vegas. Sin City has everything, including 110 degree heat, thousands of wandering, sweaty tourists looking for something that isn't there and more tacky buildings per square foot than any place on earth. You cannot take any city seriously that has a fake Statue of Liberty, a fake Empire State Building, a fake Brooklyn Bridge and a fake Eiffel Tower. But, the topper of tacky has to be the real estate developer's ultimate testament to bad design - the coup de gras of imposture  - The Grand Canal of Venice. One can only hope that what gets built in Vegas stays in Vegas. The most attractive part of this desert enclave of banality is US 15 North, the road to the natural wonders of Southwest Utah.

Scariest Travel Memory - Yosemite. Shortly after Labor Day. No Crowds. What a great way to see one of the great natural wonders of this vast country. But on this trip, the splendor of the natural world quickly evaporated when we lost our eleven year old Lance. Lance needed to use the restroom, so his mother patiently waited outside the restroom while Lance went inside. After what seemed like an eternity - no Lance. Now, my bride is not one to panic, but, after yelling from the door, with no answer, then asking a gentleman exiting if he had seen a cute little blond kid inside - to which he replied no, the freaking out began. Ready to stand in front of the exit and allow no one to leave the park, we started our feverish search. After several minutes, there he was, quietly standing on a large boulder enjoying the view. Turns out the restroom had two entrances/exits and he went out the in door! Together again, we laughed happily, but it wasn't funny.

Most Memorable Meal - This one is easy. After arriving late on a Sunday at the Castello Di Tornano, a country hotel in a tenth century stone castle, in the heart of Tuscany, we asked if we could get something to eat. Without hesitation, an awning was opened up over a table on the terrace overlooking the rolling hills of this picturesque place. As we sat down, plates of  prosciutto, risotto, cheese, bread, fruit and a nice local red were cheerily served by Massimo and his assistant. There we sat, literally under the Tuscan sun, on this beautiful plateau with an ancient castle cum hotel as  backdrop, enjoying lunch like a Don and his mistress.

So, that's just some random thoughts on memorable travel moments. I could write a book of anecdotes, but that would probably be pretty tedious. I encourage you to sit and write down or at least ponder your own travel moments that have stuck with you. It's an exercise worthy of your time. Like old photographs, travel memories give your life meaning and continuity. In this world that seems to turn more upside down every day, we need to hang on to those images. And, if you feel so led, I welcome you to share your own travel experiences. Just click on the comments link below and write away! If you are reading this as an email, then just click THENOMADARCHITECT to go to the blog for the comments link.

Video Artist of The Week - You cannot get any more random than David Byrne. The front man and main force behind the New Wave Band Talking Heads, Byrne has made a career of singing and dancing to a different beat. Always interesting and never boring.

Email ThisBlogThis!Share to TwitterShare to FacebookShare to Pinterest
Labels: Nomadic Places To See, Places to Eat, Places to Sleep