A Trip To Be Thankful For 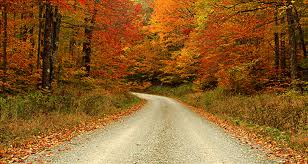 Today, it's personal. It's Thanksgiving week. I know last week I said  I would post about our second day in Italy and one of its most unique enclaves, Lake Como. But something happened on the way to waxing eloquent. This past Sunday, at the urging of my brother, we had occasion to visit my favorite cousin from my mother's side of the family who is facing the winter of her life with style and grace. Her name is Yvonne and she is a spitting image of her Aunt Juanita, my mother. Our visit brought back a flood of memories of her and the interesting life that she has lead. Let's just say Yvonne was light years ahead of the Gloria Steinem crowd. Let's also say my first exposure to big time travel and big time hotels was in a large "downtown" hotel  she managed back in the sixties, when hotels were HOTELS. She was the first woman I remember holding her own in a man's world. She had style and her own special attitude. Some would call it swagger. I always remembered her as this unique female presence that was clearly in charge and clearly in command of her world running a large metropolitan hotel.

In addition to being a trailblazer of the first order, Yvonne had something else that women and men could use a lot more of today. An amazing sense of humor. She had an easy laugh and could "chew the fat" with the good old boys as well as the girls. An excellent golfer, wife, friend and mother, she was the ultimate multi-tasker before the word was invented. And not only that, she scored tickets for her daughter and me to see the Beatles in Jacksonville, Florida at the Gator Bowl, September 11, 1964. That's OK, you are allowed to be impressed. I know I was. I was thirteen and, like all teenagers, thought the Beatles would change the world.
As we sat and talked about our lives and how they have been interconnected over the years, it reminded me that the real point of life is real life. In this ever splintering culture we live in, its the joy, laughter, pain and healing through family and friends that makes every day relevant. As we drove home, appreciative that Yvonne has been and still is in our lives, we all knew that our lives were simply better because of her. And we were thankful for that knowledge. We do not experience life in a linear, straight line fashion. There are good times. There are not so good times. But through it all, it is family that sustains us and brings all Nomads home, be it from the other side of the world or from down the street.
In The Kitchen With Susie and Dama 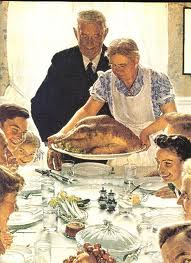 And then we get to the main event for American families everywhere. Turkey Day, Thanksgiving, Football, Kids, Grandkids and Food. I have posted before about the legacy of southern cooking that has been passed down from grandmothers and mothers to daughters and granddaughters through some strange combination of osmosis, trial and error and tradition. My wife, Susie, and her cousin, Dama, are two such women who go through the details, written in very neat cursive in what appears to be an ancient secret spiral notebook, of preparing what will be a classic southern feast that would drive the food police into fits of politically correct rage against some of the highest calorie, best tasting food this side of Eden. And there will be numerous contributions by other, equally talented, self taught master cooks of southern cuisine. As author James Dickey once said, "the south is the only part of the United States that has its own unique cookery". That sense of place and culture is still very much alive and, although the older generation complains that it will all end with them, I can already see the desire by the younger set to enrich life through the most social of all acts by human beings - the simple act of preparing and eating good food with family and friends. There simply is no endeavor that brings people together like the preparation and eating of great food.
And The Beat Goes On

As she began to wind down the day's preparations for tomorrow with the seasoning of a twenty six pound gobbler, my soul mate and favorite Nomad was questioning the directions from the grocer on the baking time for a turkey that large and decided, like the true southern culinary expert she is, that the instructions were simply incorrect and she would cook it the amount of time she thought such a huge bird deserved. If only our political leaders could act with that kind of confidence and aplomb, the world would be a much better place, indeed. So tomorrow, as you welcome your circle in for this most important meal of the year, just thank your God for the blessings you have in your life.  In the times we live, the following anonymous thought has never been more relevant:

"Life can be very trying. When your child is hungry, your body wracked with pain, or you have no idea where you and your family will find a place to sleep, it's hard to find something for which you can be thankful. So, for just a few minutes on Thanksgiving Day, step outside your situation and just "be". Find something, no matter how small, to be thankful for because in giving thanks, you will be lightening your load, even if for only a moment".
Happy Thanksgiving To Nomads All
D.L. Stafford
thenomadARCHITECT
P.S. Susie just went into the kitchen to put that giant bird in the oven. Can't wait!
Video Artist of The Week - My Morning Jacket - This Louisville band can rock with the best of them. But the masterful imagery and lyrics of Wonderful (The Way I Feel) truly sets them apart from a very short list of great indie bands.
Travel Quote of The week - Thanksgiving dinners take eighteen hours to prepare. They are consumed in twelve minutes. Half-times take twelve minutes. This is not coincidence - Erma Bombeck.
Posted by D.L.S.architect at 1:07 AM