American Regionalism Part One - Restless Nomads Can Look Away In Dixieland

In The Shadow of Levon and Ms. Mitchell

As I am writing this, I have Levon Helm and The Band playing The Night They Drove Old Dixie Down on the headset. This great song about the pain and suffering throughout the south at the end of the Civil War firmly established Helm and The Band as one of America's most iconic musical groups. I am a southerner, born and bred. I have incontrovertible evidence of that fact because I am the proud owner of a first edition copy of the great southern novel Gone With The Wind by Pulitzer Prize winning author Margaret Mitchell. Given to me by my mother, it contains  the following note written inside the front cover:


To Doyle - I bought this for your grandmother as soon as they came out and I want you to have
it as I feel you appreciate and love books and will cherish it. Love Mother - April 1, 1977.
And though I cannot confirm the exact date, my grandmother, Ruth Footman, wrote a note in the book just below the title and author's name:
GONE WITH THE WIND
by
Margaret Mitchell
wife of John R. Marsh, died August 16, 1949 in Grady Memorial Hospital
Atlanta, Ga 5 days after she was struck down by an automobile driven by Hugh D. Gravitt, a taxi driver. She was about 43 years old and a dearly beloved writer. 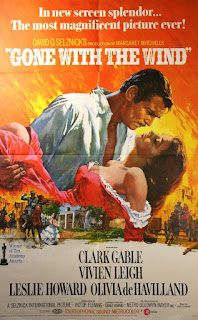 I think I can say, without hesitation, that the generational continuum of one's "southerness" is evidenced by the passing of a cherished keepsake, which just happens to define the "south of the imagination", from daughter to mother back to son and grandson. If you have read the master work or seen the David O. Selsnik produced movie, you know that it is one of literature's and cinema's great love stories played out against the tragedy and triumph of the Civil War. The movie, released in 1936, brought together one of America's greatest leading men, Clark Gable as dashing rogue Rett Butler and a little know British actress, Vivian Leigh as the indefatigable Scarlett O'Hara, to create one of the greatest movies of all time. The final scene is one of the most poignant in movie history, capturing the triumph of love and the human spirit over tragedy of epic proportions.  In all it won ten Oscars and is still regularly listed in Annual Top Ten Movie Lists.
In addition to Margaret Mitchell, the south has produced more great authors and great literature, as a region, than any other part of America. From Harper Lee's  To Kill A Mockingbird to Cat On A Hot Tin Roof by the great playwright Tennessee Williams, southern writers have long captured the unique pain and joys of all that is southern. Even Mark Twain, America's greatest writer, referred to himself as a "southern" writer. And current day authors, such as Tom Wolfe (A Man In Full), Pat Conroy (Prince of Tides) and Fannie Flagg (Fried Green Tomatoes & The Whistle Stop Cafe),  continue the southern tradition of great storytelling.
The Path To The Southern Soul - The Food, The Music and a Few Tall Tales

Real southern food - I mean, real southern food is like nothing prepared or eaten anywhere else in the world. James Dickey, author of Deliverance, a darker story about bad southerners in the extreme, said the south created the only original cookery in America, with all other regions "importing" their culinary staples from Europe and Latin America. If you have ever sat down to a meal prepared by a cadre of southern women with only what their mothers, older sisters and aunts have taught them about cooking to guide them, you know of what he speaks. From grits to fried okra to butter beans to corn bread to pan fried chicken, authentic southern food has more soul and fat per ounce than any "imported" culinary concoction from New York or LA. And of course, all southern food must be chased with the sweetest of ice tea. Lemon is optional. 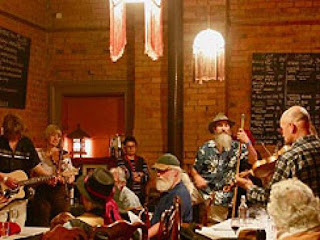 And then there is the music.Virtually all American music, including country, gospel, blues, jazz and rock, has its roots in the south. The Bluegrass of Southern Appalachia and The Blues born in the fields and watering holes of the Deep South have given rise to a plethora of musical forms that have come to define the American musical experience the world over. From Ray Charles and Bill Monroe to Tony Joe White and Lyle Lovett, it can all be traced back to someone sitting on a porch or playing in a juke joint in search of the soul of its people through lyrics and sounds about real life with real pain and real joy.

For Nomads who long for real live music, Nashville is one the South's locales that can provide many alternatives to the über hyped world of contemporary music so prevalent in pop culture today. On one of several visits to the Mother Church of Country Music, The Ryman Auditorium,  I had the pleasure of attending a performance with my world traveling daughter, a Nomadic prodigy of the first order.  If you have ever been to the Ryman, then you know that it is home to  The Grand Ole Opry, the oldest continuous radio music program in the United States, broadcasting without interruption since 1925. 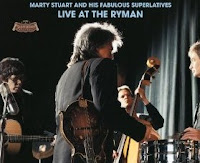 As we enjoyed some of the lesser known artists, the main attraction for the night, Marty Stuart and The Fabulous Superlatives, showed what thirty plus years of writing, singing and touring with the likes of Johnny Cash  can provide those of us that long for real music. After about an hour of an eclectic collection of gospel, rock, and country, the one and only George Jones was brought to the stage to perform one of the greatest country songs ever recorded - He Stopped Loving Her Today. And then, together, Jones and Stuart sang the saddest song, of any genre, ever written - She Thinks I Still Care. James Taylor once said of this timeless tune - "This song is so sad it'll make your roof leak". As they performed this poignant song about the pain and longing of lost love, my daughter leaned over and whispered - My friends are going to be so jealous. I raised her right!
Every southerner has a story. Even the Gen X'ers and Millennials can relate some funny, poignant or mythical remembrance from a grandmother or a favorite aunt or uncle. I can remember, as a kid, going to my grandfather's farm for the summer and experiencing the freedom and excitement of living in the country and my grandmother making flapjacks that, to this day, I have never seen duplicated. And until you have climbed up into a scuppernong vine and eaten the juiciest grapes this side of Eden until you are ill - Well, let's just say - It don't git no better! And watching and listening to a group of southern women across three generations - I call them The Steel Magnolia Girls - discuss the events of the day, as they live their lives in the most genteel, funny and eccentric way, I am confident that our history and the importance of living life on your own terms, tempered with an understanding of what came  before, is being passed on to a brand new generation.
And What About Travel for Nomads in Dixie? A Road Trip Is The Only Way 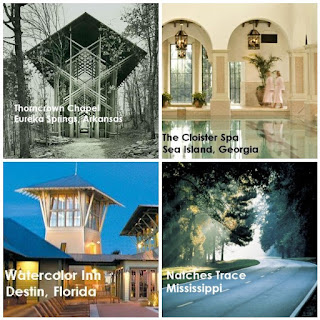 The south is full of many options for wandering Nomads in need of a place to lay their weary heads. I have previously posted about some great little places to sleep in the south. The Inn at Middleton Place in Charlotte, The Lotus Inn in Ormond Beach, Avia Boutique in Savannah or the 21 C Museum Hotel in Louisville are just a few of the places that meet the exacting standards of The Nomad Architect. In addition,  countless others can be found in virtually every state of The Old Confederacy. And, there is always Texas. However, the Lone Star State will be covered in another post due to its uniqueness and relationship to the Southern experience. From Watercolor Inn in the Panhandle of Florida to Blackberry Farm in Tennessee to The Cloister at Sea Island Georgia, the south is filled to the brim with small, intimate boutique hotels, B&B's and unique resorts for every taste and pocketbook.
The best way to see the south is to just get in the car and go. Just make a loose itinerary and hit the road. And stay away from the interstates. The south has more interesting two lane roads for curious vagabonds than you can shake a stick at. Plus, you will inevitably stumble on somebody or something that your friends back in Chicago will never believe.
And , if you see a really strange looking guy, holding a poodle dog in a country store and you hear banjos, get in the car and leave immediately!
From The Land of High Cotton - See Y'all Later
d.l. stafford
thenomadARCHITECT

Travel Quote of The Week - "We don't mind ya datin' our women or eatin' our food, but, we don't really care how ya do it in Cleveland" - Lewis Grizzard - Southern humorist, writer and raconteur

Video Artist of The Week - The Allman Brothers - from Idlewild South to Filmore East, the inventors of Southern Rock changed everything.