A BOUTIQUE HOTEL IN A TALL BUILDING - GENIUS ON THE PRAIRIE 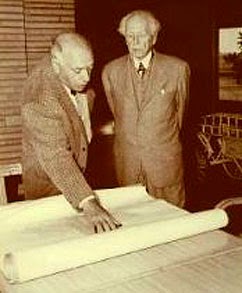 I have often wondered what an entire city, region or country would be like if it were designed by Frank Lloyd Wright. I think it would raise the human spirit because of his obsessive search for beauty and meaning in the built environment. I also think that it would be exasperating in practical terms, because it would often ignore the practical for the artful, creating unending problems for visitor and owner alike. From oddly shaped, tight spaces to chronic maintenance problems, leaking roofs and other never ending practical concerns, I think it would require the patience of Job and the appreciation of art no matter what the cost to own a Frank Lloyd Wright building.

The Price Tower is the only "skyscraper" ever designed and built by America's greatest architect. And without the ultimate benefactor, Harold C. Price, an entrepreneur and risk taker in the oil pipeline business, this one of a kind building would never have been realized. As with all great architecture, it always takes two to tango. And, in the case of the Price Tower, America's most gifted architect collaborated with the perfect client, who had the money, the spirit and the willingness to see it through. The Inn at Price Tower in Bartlesville, Oklahoma was originally designed as an office building with apartments for tenants. 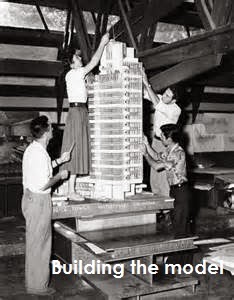 Like many great mid-century buildings, the Price Tower fell victim to the vagaries of uninformed, insensitive owners, the impact of exposure to the elements and the technical and cultural changes that inevitably cause a building to fall into obsolescence and, ultimately, into disrepair. And, as one would expect, the history of exactly how this unusual building came to be is convoluted and complicated. For a detailed timeline and "inside baseball" account of the tower, you can read  Prairie Skyscraper on the tower website.

Saving such a building usually involves people with great passion for the art they want to preserve and tons and tons of money. After years of misuse and decline, Phillips Petroleum donated the building to The Price Tower Arts Center. Through their efforts and many benefactors, as well as the very sensitive design efforts by architect Wendy Evans Joseph, this great little tall building has been repurposed as a nineteen room boutique hotel, which makes the trip to Bartlesville worth at least one night's stay for  design seeking Nomads.
Bartlesville, Oklahoma - You Can't Get There From Here
For the uninitiated - Bartlesville is NOT a destination. About an hours drive from Tulsa, this prairie town of 36,000 has nothing to offer vagabonds looking for excitement, unless you are really interested in Phillips Petroleum or its wealthy founder, Frank Phillips, and the wild animal preserve Woolaroc. The oil giant, now headquartered in Houston, was founded in Bartlesville. No boutique spas or five star restaurants greet the Nomad looking for a good time in this small enclave not far from the southern border of Kansas.
However, if you want to experience the intense design quality of one of Frank Lloyd Wright's most innovative structures which has become a striking boutique  hotel in the only skyscraper ever designed and built by America's most egomaniacal architectural genius, Bartlesville is the place to go.

Sleeping In "The Tree That Escaped The Crowded Forest" -
As was his tendency, Wright referred to his one and only built skyscraper in poetic "organic" terms. And it is organic and its is poetic. The building, particularly the interiors,  "reads" mostly like Joyce Kilmer, with some William S. Burroughs thrown in to keep you on your toes, literally. First and foremost, the interiors of the hotel have been restored almost to perfection. Fortunately, the interior design by Architect Joseph complements Wright's mastery of space, without simply copying him. The finishes, the furniture and the accessories are thoroughly modern and enhance the experience of the spacial dynamics of the original design.

It has been well established that Wright based much of the scale of his interiors on himself. He was only about 5'6". It makes perfect sense that a narcissist of the first order like Wright would dimension his buildings to "fit" himself. This practice is very evident in most of his buildings. However, in his defense, he also utilized this design slight of hand as a device to enhance the experience of "exploding" larger and more grand spaces, like the two story suite we stayed in. I highly recommend this room type when you stay. Not only is the bed to die for, but, the interior space is truly a delight and the view out over the town and prairie beyond through two story glass is worth the few extra dollars.

Some areas of the hotel, particularly the unit stairs, doors and other access ways are very tight, forcing one to deal with Wright's obsessive adherence to the angular geometry established as part of the basic design. And, in the interest of full disclosure, the air conditioning was on the fritz the night we were there. To their credit, the management offered to refund our money and set us up in a nearby hotel, but, being very tough nomads, we rejected that offer. As I told the concierge -  What's a little heat when you're enjoying Wright up close and personal? And once the sun went down, it was more than comfortable. This was our forty first anniversary trip and we did not want to spend it in a Holiday Inn Express! We were more than rewarded for our unwillingness to settle with the great views out over the town and prairie with the Oklahoma sun  setting in the west.

The hotel has Copper, a  bar and restaurant on the fifteenth floor with outdoor terraces to enjoy the food and more views. However, we were there on a Monday and, alas, Copper was closed. However, we were able to enjoy a nice continental breakfast on one of the outdoor terraces. Decent food and, again, outstanding views. Just know that the elevators that take you to this floor will only hold 2-3 people. Very European in a mid-century modern kind of way. And finally, the docent led behind the scenes tour of the building is well worth the nominal ten dollar fee. It opens with a short documentary film, after which the docent takes you through many of the spaces not open to the public. Our docent, a transplant from I forgot where was informative and at times utterly hilarious. Her knowledge of the men,  the building and the many myths about both was fascinating.

After the building tour, I recommend spending about two hours driving around Bartlesville to see some of the eccentric houses designed by Oklahoma's most famous architect, Bruce Goff. Like Wright, Goff, who designed his first building as a teenager and later became the head of the school of architecture at The University of Oklahoma, was also an adherent of organic architecture. His houses are worth seeing for those of you who want to see organic design at its edgiest. Just ask the concierge for the list and search them out with your I-phone. Great way to spend an afternoon in the metropolis of Bartlesville.

As we loaded the car for the next leg of our road trip, I felt like the vagabond that had found yet another gem. I realized, once again, that Frank Lloyd Wright, who was called many things during and after his controversy filled life, was, after all is said and done, a truly great architect. And, I was thankful that someone had the vision, the passion and the money to ensure that this building in this place is still here in all of its imperfect glory.

On The Road Again


Travel Quote of The Week - "Give me the luxuries of life and I will willingly do without the necessities." - Frank Lloyd Wright. Don't tell me old Frank was not a vagabond at heart!

Video Artist of The Week - Alabama Shakes - Purveyors of "Roots Rock" - This edgy group, yes they are from Alabama, lays down some great grooves, combining, folk, rock and country for a completely unique sound.