If You Will Allow Me A Little Latitude
This alert is not about travel unless you count the ten minute drive from our place to the local football stadium. It is about college football, America's greatest sport, at its best. Baseball may be America's pastime, but, college football brings out the passion of red blooded Americans like no other sporting endeavor. Hyperbole not withstanding, the athletic contest this weekend past, between two titans of the college football world, was truly epic. And I was there.
COLLEGE FOOTBALL GROUND ZERO - Bobby Bowden Field at Doak Campbell Stadium, Tallahassee, Florida. During the day, it was discussed ad nauseum. ESPN's College Game Day was on the campus of Florida State University, my alma mater, to cover yet another Game of The Century in my home town. Herbstreit, Fowler, Howard and Corso, along with numerous other experts and talking heads, opined on every facet of what would, indeed, become an epic sporting event.  As the sun began to set, ushering in a classic  fall night in God's Country, eighty thousand plus football fans, who will return to normal lives come Monday, went utterly insane for four hours watching two powers of the gridiron play what will surely go down as a football game that will be discussed in epic terms for years. 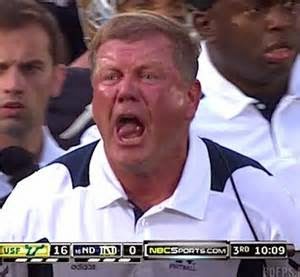 The University of Notre Dame, with its tedious fan base, its arrogant you know what coach and its Machiavellian myth machine was in town to play the reigning National Champions, the Florida State Seminoles, who have become the latest success story that sports media and many football fans love to hate. This is a result of sports fan's penchant for wishing the worst on the best and the off field antics of its Heisman winning, gregarious, twenty year old football savant quarterback, Jameis Winston. All of that is for another blog in another place, but, I had to mention it for context.


The famed ESPN analyst, Beano Cook, once said that football is a religion in the South. He explained the passion of southern football thusly - "In the north, they hang losing coaches in effigy, but, in the south, they actually hang the coach". Now I have never witnessed an actual coach lynching, but, you get the point. So, even if you are not a football fan, you can surely understand the passionate desire of most of the eighty thousand football fanatics to return the pious Golden Domers of Notre Dame back to South Bend with a loss.

This One Was Not For Wimps
The game was one of those rare events that you need a strong heart to survive. As I joked to our crew, this game had it all - pathos, comedy, frustration, ineptness, brilliance and, above all, great football. With great play from both teams, this epic gridiron battle of two national powers came down to two plays, one penalty and thirteen seconds. With the score FSU-31 & ND-27, Notre Dame was on the three yard line, after driving the length of the field in about five minutes. Fourth down and goal. Things were not looking good for the 'Noles after a brilliant second half by Winston et al to take the lead. Upon completing a walk in pass for an apparent touchdown, Coach Brian Kelly and his  Fighting Irish began to celebrate.

But wait - You could hear the whispers of those fateful words from the football gods and FSU alum Lee Corso- "Not so fast my friend". Indeed, the small yellow piece of laundry lay in the end zone for all to see. As a weary, emotionally spent crowd of insane football fans waited for what seemed like an eternity, the referee announced an offensive pass interference penalty, known in football vernacular as a pick, against the usual beneficiaries of football karma. the Domers of South Bend.  But on this good night, the unconquered Seminoles would not go quietly.

No touchdown - Replay the down - said the man in the striped uniform.

With a scant thirteen seconds remaining, and the ball now on the eighteen yard line, Notre Dame quarterback and future Heisman candidate, Everett Golson, whose arm was hit by defensive back Jalen Ramsey as he released the ball, threw a wounded duck interception into the hands of streaking Seminole linebacker Jacob Pugh  in the back of the end zone. Then, the deafening sound of eighty thousand screaming  normally normal spectators permeated the crisp fall air, erupting into a cacophonous insanity that non sports fans would call utterly stupid, mindless celebratory behavior unbecoming to right thinking, otherwise intelligent people. Am I embarrassed? I am not. Without the emotional release of college football, I shudder to think what the maladjusted, nomad or couch potato,  might do during the course of their, otherwise, normal lives.
So there you have it. Not all great trips require long distance travel. Sometimes, the best of the best is right around the corner. I remember when I saw the Statue of David for the first time, thinking - 1)Leonardo was indeed brilliant and 2) Man that thing is big. This Saturday night past shows that brilliance comes to Nomads in different ways. Both art and spectacle do, indeed, make life better.
GO NOLES!!!!
D.L. Stafford
thenomadARCHITECT

And for those of you that can't get enough, this pregame hype video is just for you.
Posted by D.L.S.architect at 12:13 PM