That's right, a minivan! When I pulled up to the Marriot in Dallas to pick up "the kids", my son - the first one out the door - exclaimed in his best high pitched Leave It To Beaver voice - HI! DAD!! Then the rest of the crew piled in and discussed, ad nauseam, our mode of transportation for our days in Big D and our subsequent trip south to the tattoo capital of the world, Austin. You know how kids are. Wow dad, what a cool ride said the daughter snarkily. Was this an upgrade? asked the daughter-in-law laughingly. Well, at least we won't get a ticket for speeding said the mom admonishingly. And on and on. However, no one complained about having their very own seat. We just put the 5'2" daughter-in-law, the one who queried me about the upgrade, in the little seat in the back and all was very cool. Perfect ride I say.
As we made our way south on Interstate 35 from Big D to Austin, I was happy as a tipped cow to have all of the family headed for some good times in the Live Music Capital Of The World. After hours of searching dozens of web sites, I found a place  that would sleep five  just off South Congress Avenue (SOCO), which is THE happening area in Austin. A 1926 bungalow had been repurposed with some serious funk to create a very cool landing spot for the four days/three nights we were in the place that boasts many favorite offspring, including Willie Nelson, Stevie Ray Vaughn and The Fabulous Thunderbirds. 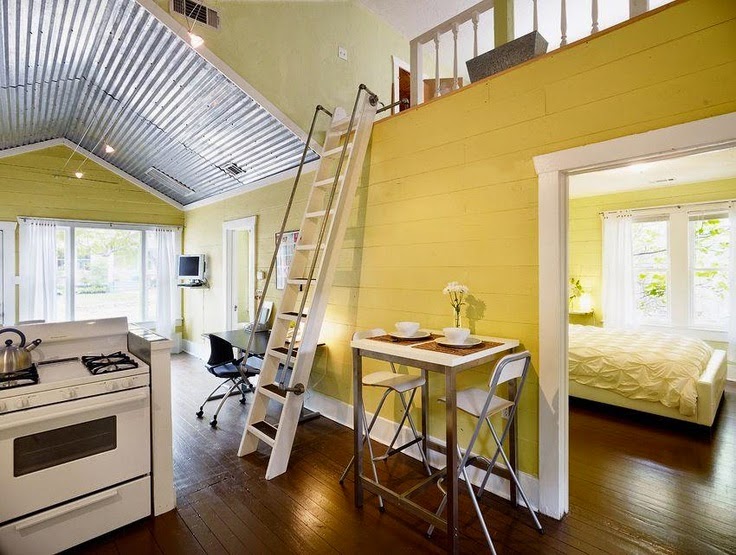 Complete with old doors,  corrugated tin ceilings and a very funky paint job, in and out, The Red Bungalow proved to be a real find. It had all the basics, including a nice outdoor patio for socializing with your morning coffee and it was within easy walking distance of the clubs, restaurants, museums and ridiculously high priced boutiques of every ilk on South Congress Avenue. The bathrooms could have been a bit bigger and the furniture was somewhat sparse, but, other than that, it was good quality space for our familial coalition of five vagabonds in search of a happening in a city where residents boastfully proclaim - KEEP AUSTIN WEIRD! And, based on the sights and sounds of this unique town, residents and nomads alike nurture that admonishment 24-7.

BAT**** CRAZY IS NOT JUST ANOTHER ADJECTIVE IN AUSTIN 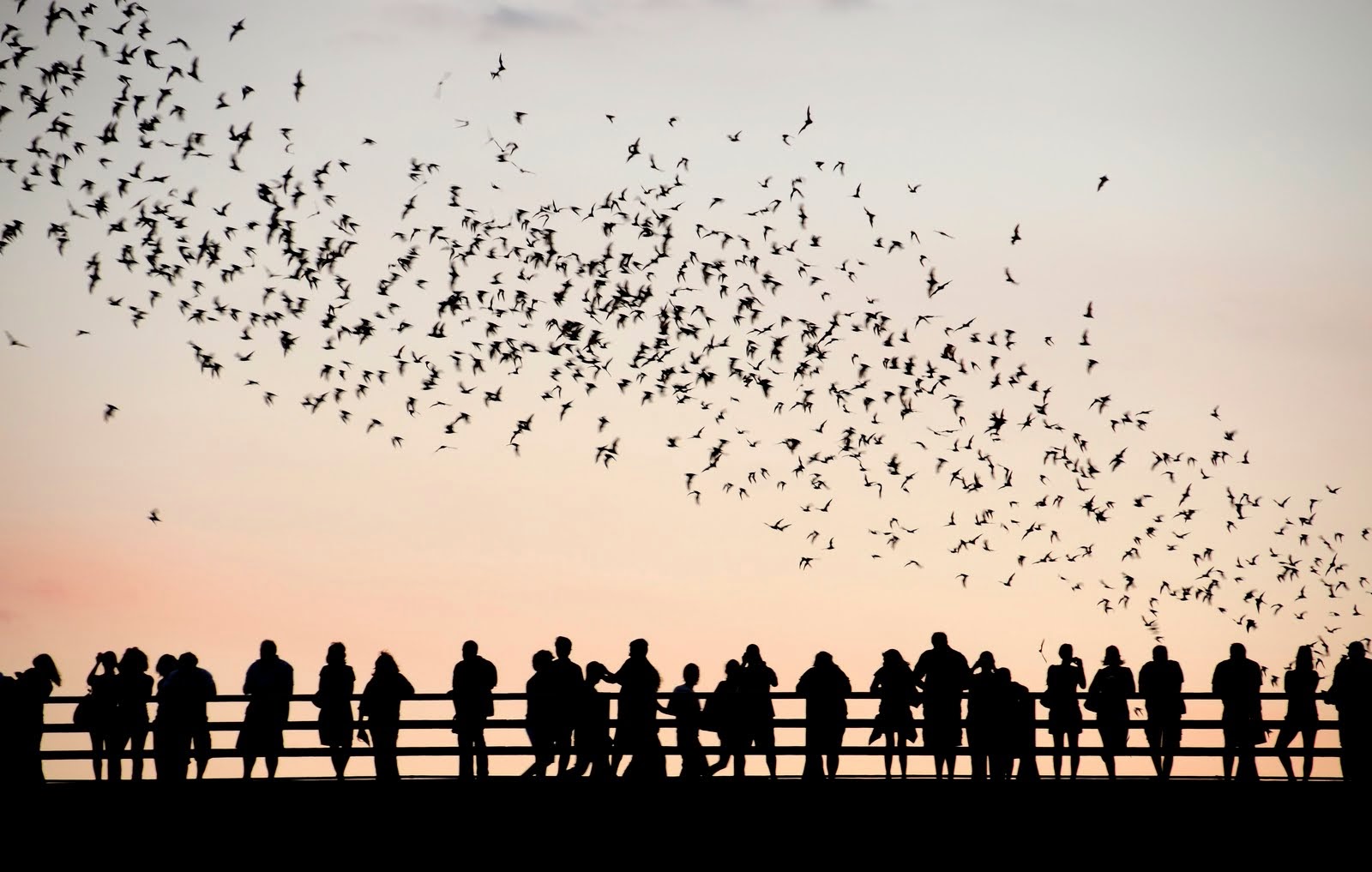 That's right, locals and visitors alike go crazy over bats in this town. Observing the short migration of 1.5 million bats every night at dusk is truly an unforgettable experience. According to local legend, when the bridge was renovated in 1980, the bats found the cracks and crevices built into the bridge a perfect place to call home. Presto! Lots and lots and lots of bats call The South Congress Avenue Bridge over Lady Bird Lake home.     Although in residence as early as March, the best time to witness this man assisted natural phenomenon is in August, which is when we were there. Perfect planning by you know who. They apparently winter in Mexico. I am sure they are included in the latest version of The Dream Act - just kidding.

I also highly recommend paying ten bucks for an open top boat for viewing from the lake. You don't have to fight the crowds on the bridge and the little lady that captained our launch was very knowledgeable about the bats and the Austin skyline. And no need to worry about bugs, since the bats eat 10,000 to 30,00 pounds of insects on their nightly flight. Watching the sky turn black with over a million bats, as they take to the countryside, is a great way to enjoy an early evening with family and friends. And don't forget to bring along a cheap merlot or pinot and some Dixie cups. Good time, indeed. Apparently tattoos   generate   some  form of street cred in ultra hip Austin. Every size, color, style and theme can be found on bodies, ankle to neck, along with mega piercings of every lip, nose and ear. I cannot attest to other parts unseen. The GEN Y generation apparently has an almost obsessive need to express their individuality with tattoos. One day, in a galaxy far far away, when the inevitable drooping, dropping and sagging sets in with age, the old Millennials will lament the foibles of their youth. As a friend once noticed about a lady friend who had put on a few pounds - It used to be a butterfly on that cheek, but now it's a California condor. Austin locals, from pizza joint waiters to hotel concierges, wear their body art with intense pride. And that attitude is pervasive all up and down SOCO. 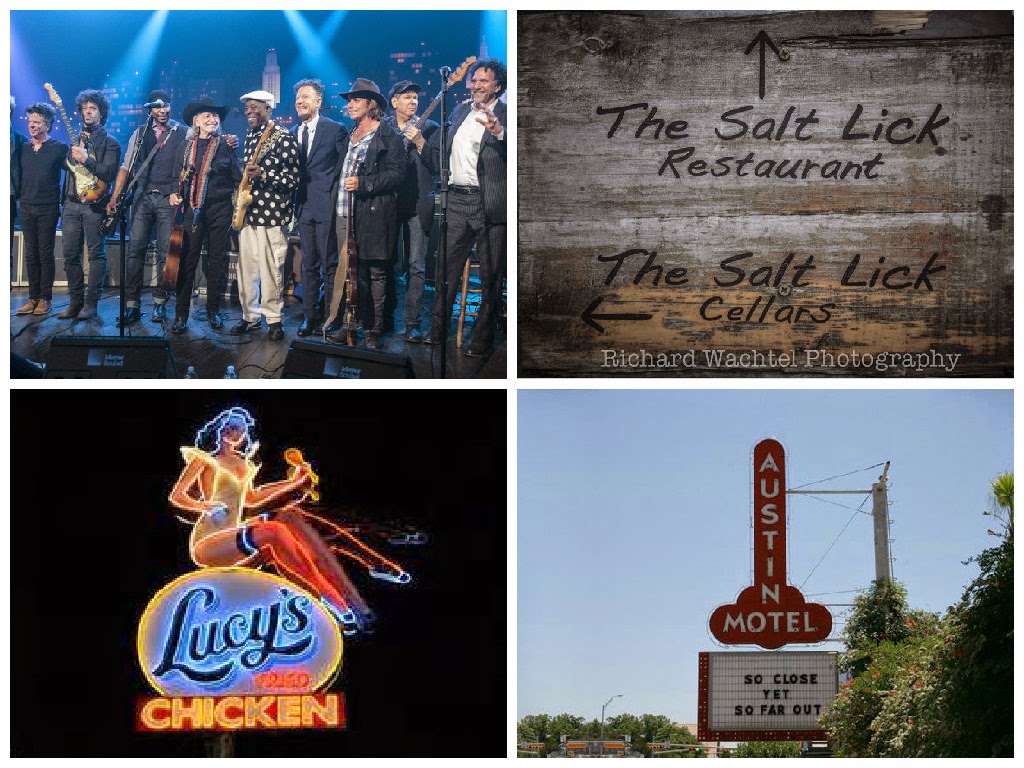 If you are a music lover, then Austin is, indeed, where you need to be. Specifically, live music is around every corner and in every venue from barbecue joints to the famed Austin City Limits. Unfortunately ACL had no performances while we were there. In addition, I have read that you need a special dispensation from the Pope to score tickets or be best buds with Willie Nelson. One very cool place we went to enjoy barbecue and some good live R&B was Salt Lick Barbecue. You can also pick up some Texas wine at Salt Lick Cellars next door. Our friend for life, Paula, a transplanted  Floridian took us to this great little spread in Texas Hill Country. It's nice to know we have a friend in one of the coolest town's in America who knows their way around the place.  It's a must visit for hungry vagabonds where great food and music can be had with a view. And having a true Austinite show you around doesn't hurt.

Tex-Mex, Fried Chicken, All of The Above - you name it - is available in the culinary haunts in every corner of this great city of just under a million. It may be left of center politically, but Austin is pure right all the time when it comes to food. Whether it's Lucy's Fried Chicken, which manages to turn comfort food into something sexy or Torchy's Tacos for serious Mexican with that undeniable Texas Touch and bottled cokes. Oh yeah baby! 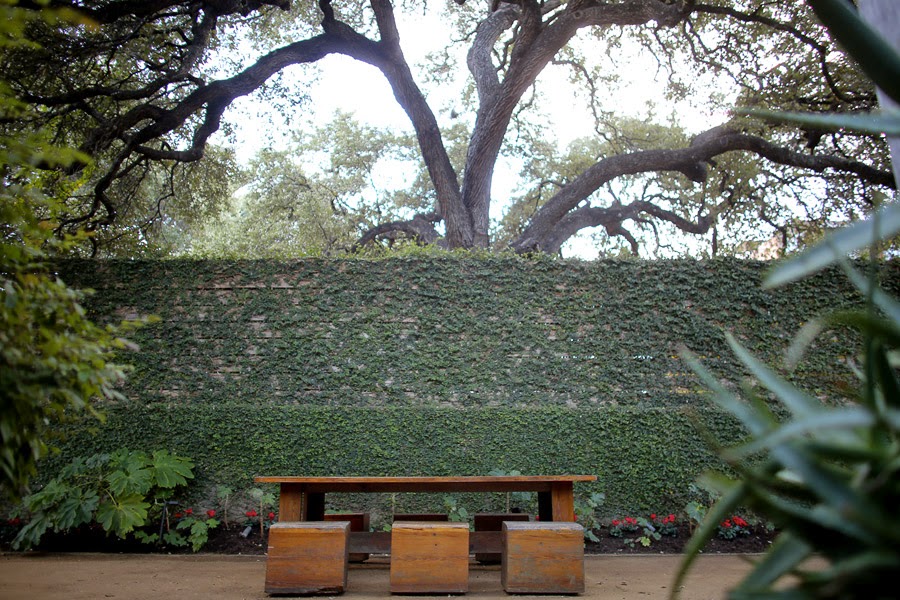 I would be remiss, as an architect and nomad, if I did not mention one place to sleep in Austin that has been on my Vagabond radar for years. Hotel San Hose' is a repurposed, updated motel right on South Congress. Unfortunately, the place was booked and it is pretty pricey. However, I did take the time to walk its zen like environs and public areas. With its minimalist aesthetic and blend of natural materials laid over the bones of an old motor inn, it seems to live up to its billing. Very retro eco. So, when in Austin, its worth checking out.

Austin should be on every Nomad's list of places to see before you die. It is as All American in a Texas style kind of way as you will find. Like Lyle Lovett says in the song of the same name "That's right - your not from Texas, but, Texas wants you anyway". As we boarded the plain for good old Tallahassee, that song kept playing in my head. I am not from Texas but every time I go, I feel like maybe they do want me. With the right jeans and the right hat, who knows?

Travel Quote of The Week - "Some folks look at me and see a certain swagger, which in Texas is called walking" - George W. Bush

Video Artist of The Week - Norah Jones & The Little Willies - Born in Brooklyn, raised  in Texas, Norah Jones is the daughter of concert promoter Sue Jones and Ravi Shankar, master sitar player (Yes - The guy that taught Beatle George Harrison). The multi-award winning artist formed an ad hoc group of players and singers - The Little Willies - who turn out some amazing music that you will NEVER hear on the radio. One of the most compelling recordings by this group is a little ditty called "Lou Reed" with Norah Jones on piano & vocals, Richard Julian on vocals, Jim Capilongo on guitar, Lee Alexander on bass and Dan Rieser on drums. Just picture it - Mr. Velvet Underground tipping a bovine. Now that's something to ponder!