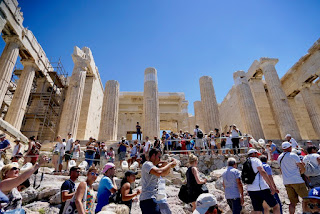 Well, he is absolutely correct, but, we really didn't have a choice. I will make this post very simple with a point by point sampling of what happens when a trip or at least part of a trip goes completely and irrevocably south. Here goes:

As I explained in my last post, we lost an entire day in Athens due to some iffy weather and mechanical problems, returning to the gate and changing planes out of Atlanta, thus causing us to miss the connection from JFK to Athens. After a night in NYC, we got to JFK early enough to ensure that we would make the flight.

With an uneventful flight to Athens with some of the most disgusting food I have ever been served on an airplane and a very brief trip through customs, we went to collect our luggage. We all know how that works - you stand there and watch the rolling conveyor deliver the bags for 280 plus tired souls that have been cooped up in a sardine can for nine hours. And then it happens - THE CONVEYOR STOPS AND YOUR BAGGAGE IS NOWHERE TO BE FOUND! And then your day takes that inevitable turn to the dark side of travel. That's right - CUSTOMER SERVICE AND LOST BAGGAGE CLAIMS -  IN GREECE!! As I gave the very nice Delta representative all of the information I had, it turned out the bag was sent to Heathrow and then returned to JFK. Well OK then, this will be fine. I can just wear what I have had on for at least 12-14 hours for another 24-48 hours. However, due to the calm demeanor of my better half, I did not loose my mind at this prospect. 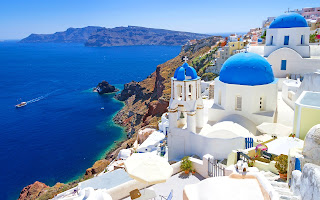 We were able to see some of the Acropolis the morning of our flight to Santorini - more on that later - and the travel gods did take pity on us and allowed my lost luggage to show up at the Athens Airport, so I was able to pick it up before our outbound flight to Santorini. When we got on the 55 minute flight to paradise, the thought of Athens began to fade and when we arrived at one of the most amazing AIRBNB's we have ever stayed in, Athens became a distant memory. So all became well. It is impossible not to feel good in this beautiful island paradise. My next post will be on the Morfes Luxury Residence and the incredible people of Greece and Santorini. All great.

And for some great listening of a new country/pop/rock artist from Oklahoma who is making his way into the big time after appearances on ACL and other critical venues - 23 year old Parker Milsap doing a little ditty called Pining.