No. 10 X 4 on The 2012 XMAS Countdown for Sunday - Shout Hallelujah! Handel's Messiah - A Soulful Celebration

One Man's Brand New Song Is Another Man's Heresy 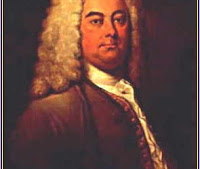 The purists will banish today's Countdown tunes to the black hole of undesirable noise. And they will forbid them to be played in their presence ever again. But, this whole countdown thing is predicated on the idea that a diversity of styles, artists and yes, even centuries is a good thing. George Frederic Handel composed his master oratorio The Messiah, arguably the greatest work of religious music ever written, in 1741 in a scant 24 days. Pretty amazing when you consider that it took the Eagles a year and a half to produce Desperado, which only reached No. 41 on the Billboard charts in 2004.
And then there's 1992. A talented group of arrangers, producers and directors including Mervan Warren, Richard Smallwood and Take 6 collaborated with an equally impressive roster of R&B, gospel, big band and jazz  artists like Andre Crouch, Larnelle Harris and Quincy Jones  to make one of the most original interpretations of Handel's master work ever recorded.
And today, just because it's the second to last Sunday before Christmas with only ten days left until Christmas, you can listen to four tracks from this Grammy and Dove award winning project and enjoy  the essence and variety of this innovative recording project.
No. 10 X 4 Inspirational Tracks on the 2012 XMAS Countdown from Handel's Messiah - A Soulful Celebration:
Every Valley Shall Be Exalted (Isaiah 40:4)
Vocal gymnastics and a little hip hop make the rough places smooth indeed.


Why Do The Nations So Furiously Rage Together? (Psalm 2:1)
Al Jarreau jazzes up this scripture like no one else.
For Unto Us A Child Is Born (Isaiah 9:2)
You've never heard coral singing like this.
Hallelujah Chorus (Revelations 11:15 and 19:6)
This will make you get up and praise the Lord!
Hallelujah and Merry Christmas
d.l. stafford
thenomadarchitect
P.S. - Note To Purists: Handel's Messiah - A Soulful Celebrations has been officially and publicly recognized by Handel House, the official George F. Handel museum in London, England.
Posted by D.L.S.architect at 9:16 AM