YOU HAD ME AT HOLA 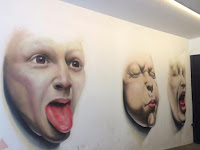 That's right. The people of Spain throughout are friendly, helpful and seem to truly enjoy their lives. AND - they generally either speak English or give it their best college try. OK - I will admit a certain digression in my recounting of one of the truly great adventures this Nomad, his Mrs. Nomad and his Nomad Kids in one of the greatest countries on the planet - Spain. To bring all of my favorite readers up to speed, please click on the following links to read the first three posts about our 2015 trip to The Land of The Conquistadors:
Waitin' On A Plane To The Plain In Spain  / Madrid - Europe's Second Coolest Capital  /
Museum Day In Madrid - Guernica And Tapas 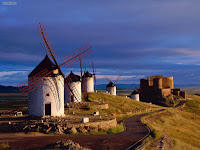 It was our third and last day in the urban metropolis of Madrid. So what are a boy and girl to do in Ispania, the land of  rabbits, as the Carthaginians named it in 300 B.C.? After picking up a sweet little Volvo number, we struck out for the land of La Mancha and the storied windmills of Señor Don Quixote & his loyal squire Sancho Panza. With our I-phones and Google Maps directing us - we are after all conversant with all the latest in vagabond technology - we arrived in the land made famous by the the first modern novel - Don Quixote by Miguel de Cervantes Saavedra.

As Exploradors, we took in completely an area of Spain that has become the physical embodiment of the myths so poetically written about in the great novel by Cervantes. The area, and, more specifically, the windmills must be seen on any trip to Western Spain. It is, at most,  a relaxing two hour drive from Madrid through the plains to an area and the small town of Consuegra nearby that feels almost medieval. There are several restored windmills. Four are still usable with the machinery still working so you may, if you desire, see how these ancient structures used to work. It is said that these windmills were passed down from generation to generation and the primary purpose of them was to grind grain.  There is also a tenth century castle to enjoy.

One thing that must be experienced, no matter how many books or pamphlets you read about the area, is the vibe. With the windmills standing strong on a long rise against flat plains surrounding these vigilant structures, it feels like you have truly stepped back in time. This was a great, inexpensive, relaxing day trip from Madrid.

So, check your New Year's Resolutions AND your Bucket List, and get busy making plans to travel to one of Europe's truly great countries with great hotels, great food and some of the most amazing architecture on the planet. Any country that produced the master of modern art Pablo Picasso and one of the world's greatest architects, Antonio Gaudi, must be on every Nomad's Bucket List. With the Euro at an all time low against the Dollar, there is no better time to go than 2017.

Video Artist of The Week - The Avett Brothers - OK - I am a new fan of this pop/rock/folk band from North Carolina. This band of two brothers and other great players and singers dishes out an entirely new take on pop, blues, country, honky tonk and ragtime. Take a listen of a cut off their latest CD - Ain't No Man.
Posted by D.L.S.architect at 5:18 PM

Email ThisBlogThis!Share to TwitterShare to FacebookShare to Pinterest
Labels: 2017 TNA Posts, Cool Stuff To Do in Spain, Nomadic Places To See